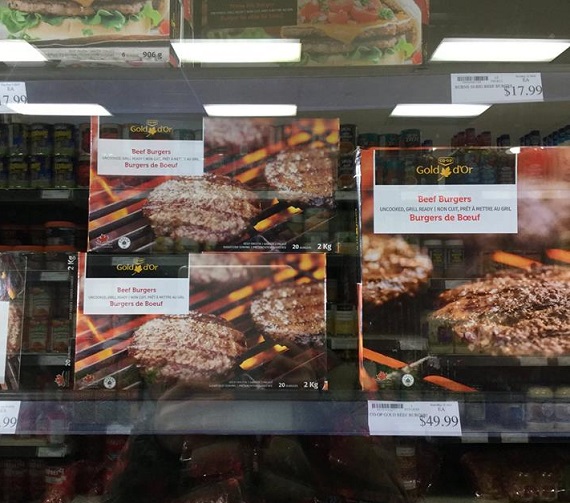 This image taken in a store in Whale Cove shows a selection of frozen, pre-made beef burgers for $49.99 a box. (IMAGE COURTESY OF FEEDING MY FAMILY)

Nutrition North Canada, in place since April 2011, offers subsidies to offset the cost of certain perishable and healthy food items shipped into northern communities, including those across Nunavut and Nunavik.

But the $80-million-a-year program has been criticized for being inefficient and failing to respond to the needs of northern and Indigenous communities.

“It has been our experience that the NNC lndigenous Working Group does not embody the constructive distinctions-based relationship that is necessary between the federal government and lnuit for meaningful program improvements,” ITK President Natan Obed wrote in the April 2018 letter to Carolyn Bennett, minister of Crown-Indigenous relations.

“We are requesting that an lnuit-specific process be developed that supports lnuit self-determination and recognizes lnuit as key partners in the NNC Program.”

During an Oct. 20 interview on CBC Radio’s The House, Leblanc responded to that letter, acknowledging ITK’s concerns.

“I certainly share those frustrations,” Leblanc said. “I have a sense that the program, to be blunt, has sort of lost its way.

“It hasn’t been renewed or been made relevant for many of these communities,” he said. “And that’s what I hope to announce in the coming weeks.”

Statistics Canada’s latest numbers show that more than half of all Inuit adults in the Inuit Nunangat suffer from food insecurity, or a lack of food.

And the highest levels of food insecurity in the group are found among Inuit living in Nunavut and Nunavik, where approximately 55 per cent of people don’t get enough to eat.