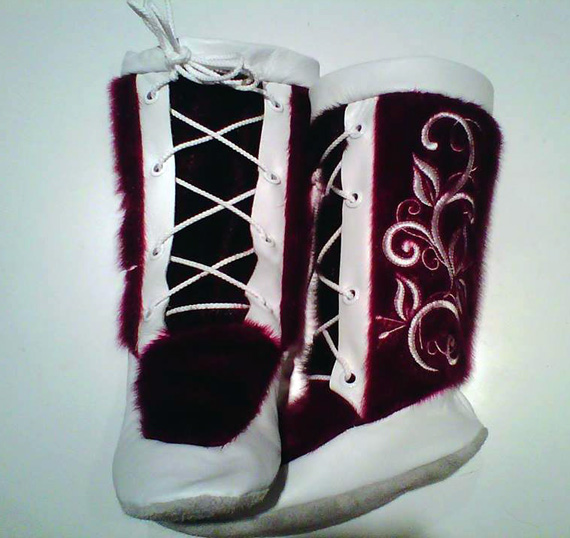 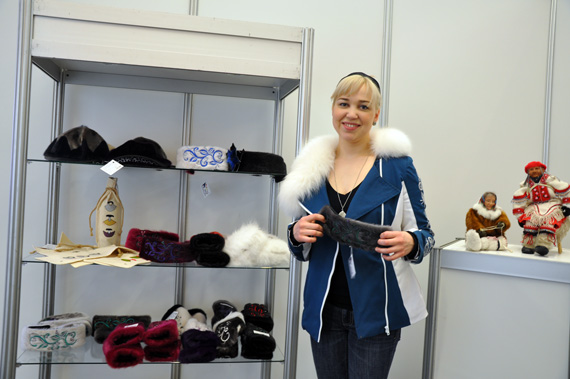 Victoria Kakuktinniq shows off some of her seal skin, embroidered headbands, on sale at her booth at this year’s Northern Lights business and cultural showcase. (PHOTO BY SARAH ROGERS)

OTTAWA — Victoria Kakuktinniq is eager to talk about her budding career in fashion, but first she has to finish a big sale.

After the Inuk designer’s work was modeled on the runway at the Northern Lights business and cultural showcase in Ottawa Jan. 31, Donna Duncan, the wife of federal minister of state John Duncan fell in love with one of Kakuktinniq’s purple seal skin parkas.

It’s a sleek and fitted coat, with embellishments on the arms and chest — $1,750 later, Kakuktinniq and Duncan part: one a happy saleswoman, the other a satisfied customer.

“It’s such an amazing experience,” Kakuktinniq said of her first time at the Ottawa trade show. “You get more and more motivated when you see your stuff exposed to such a big audience.”

Kakuktinniq, 24, first took an interest in sewing and design while doing a 2011 workshop, part of the Miqqut program, in her home town of Rankin Inlet.

At a time when social media has given a major boost to Inuit fashion and its designers, the self-employed Kakuktinniq hasn’t had trouble finding her niche in the market.

That’s thanks to the unique and trademark embroidery most of her designs: intricate, floral motifs stitched into headbands, kamiks and form-fitting parkas.

“I just incorporate tradition into my pieces, but I also bring a more modern style,” Kakuktinniq said. “A lot of the embroidery I do is just floral, but I’d like to eventually incorporate other Inuit symbols.”

Kakuktinniq isn’t sure if her style was influenced by growing up in the Kivalliq; she does believe that that region boosts its own distinct style and that its young designers have had a big hand in evolving Nunavut’s fashion industry.

Although sewing has long been a mainstay of Inuit culture, Kakuqtinniq sees it growing in popularity.

“It’s really a way to keep our culture alive,” she said.

It’s also a major source of income for Kakuqtinniq and a growing number of seamstresses across the territory.

While she works from home, using a Facebook page to sell her creations, Kakuqtinniq will be looking for funding this year to launch her own website.

“I really hope I can open up a boutique one day, and get around to all these kinds of events and fashion shows,” she said.

“I’m really proud of being a seamstress.”

You can check out some of Kakuqtinniq’s design on her Facebook page: Victoria’s Arctic Fashion. 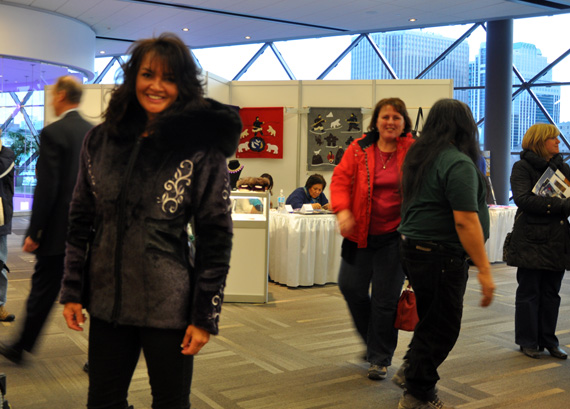