Starting on Wednesday, Northern Lights 2018 will shine over Ottawa 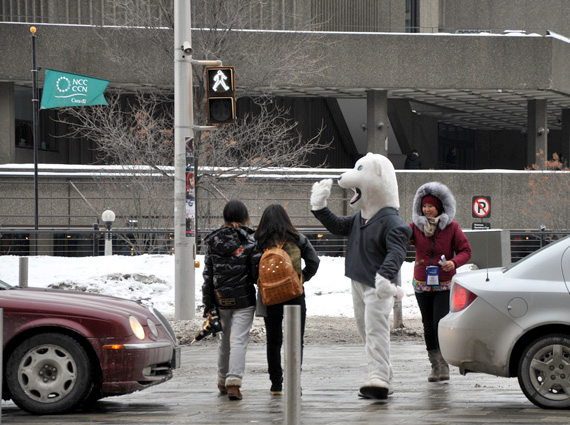 The polar bear mascot for the Northern Lights trade show directs traffic in downtown Ottawa during the 2014 Northern Nights conference. You can find this year’s conference at the Shaw Centre, starting Jan. 31, with the public welcome to the arts and culture exhibitions Feb. 1 to Feb. 3 in the afternoons. (FILE PHOTO)

If you’re in the North this week, you may wish you were in Ottawa, along with roughly 1,500 delegates and exhibitors expected at the Northern Lights 2018 event that gets underway on Wednesday in the city’s Shaw Centre.

At Northern Lights, which runs from Jan. 31 to Feb. 3, you’ll find northern premiers, presidents of the Inuit regional and national organizations and representatives from Greenland, along with Carolyn Bennett, federal minister of Crown-Indigenous relations and northern affairs, and other government officials and business leaders.

The schedule for the meeting portion of Northern Lights includes many sessions on such topics as tourism, transportation, fisheries, mining and northern energy solutions.

As well, the winners of of the sixth annual Arctic Inspiration Prize, which issued a shortlist of finalists this past December, will be announced at an awards ceremony during the evening of Wednesday, Jan. 31.

New this year: up to $3 million will be shared among the winners, through three new prize categories.

Feb. 2 brings two invitation-only events for delegates and exhibitors, a Nunavut Night—billed as an evening of Nunavut entertainment, art, and food with Riit, Silla + Rise and the Inuuqatigiit Band (Daniel Kolola Band)—and a Nunavik Night, with William Tagoona, Twin Flames and the Sugluk Band.

But everyone will be up early Feb. 3 for the 8:45 a.m. session on “Leading Development in the North American Arctic,” offered in partnership with the Centre for International Governance Innovation, which features Nunavut Premier Paul Quassa, Suka Frederiksen, Greenland’s minister of independence, foreign affairs and agriculture, Byron Mallott, the lieutenant governor of Alaska, Yukon Premier Sandy Silver and Bob McLeod, the premier of the Northwest Territories.

For Northern Lights 2018 delegates, this experience doesn’t come cheap, as a delegate pass costs $695, but public admission to the Arts and Cultural Pavilion, open Feb. 1 to Feb. 3, is only $10.

The Shaw Centre, also known as the Ottawa Convention Centre, is located in downtown Ottawa at 55 Colonel By Drive, attached to the Westin hotel and the Rideau Centre.