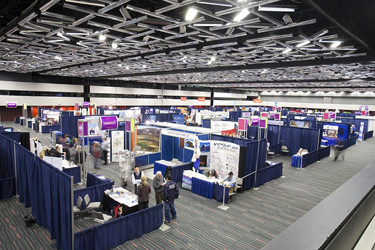 The last Northern Lights trade room floor was set up at Montreal’s Palais de congrès in January 2010. This year, organizers already expect more than 1,000 delegates and exhibitors to attend the event, which kicks off Feb. 1.(FILE PHOTO)

Northern Lights 2012 is set to shine over Canada’s capital city this week.

The business and cultural showcase of Canada’s North and eastern Arctic will run for a third time from Feb. 1 to Feb. 4 at the Ottawa Convention Centre.

More than 1,000 participants are already registered to take part in the four-day event.

But the basic framework of the showcase will be the same in 2012, and will offer a trade room floor, an arts and culture pavillion and workshop sessions.

The 2012 showcase, which has a budget of about $1 million, has attracted high-profile speakers like environmentalist David Suzuki, Quebec premier Jean Charest and Newfoundland and Labrador premier Kathy Dunderdale.

Among the performers scheduled to appear at the event’s closing gala are singer Susan Aglukark and athletes from Team Nunavik-Quebec.

Although Northern Lights gathers business, political and cultural participants from across the North, Hal Timar, the executive director of the Baffin Regional Chamber of Commerce, said the event has proven most popular with those who are new to Arctic business and culture.

“We’ve had lots of southern businesses come tell us that, without this kind of event, they’d have had a very difficult time connecting with the North and probably wouldn’t have otherwise,” Timar told Nunatsiaq News last fall.

“It’s an inexpensive way to get a feel for the landscape.”

Northern Lights is also teaming up with the Arctic Children and Youth Foundation to present a charity auction during its gala dinner Feb. 4, where participants can bid on Inuit artwork, outdoor clothing, a guided Northern adventure or a diamond-studded watch.

All the proceeds from the auction will go directly to the foundation, which works to develop programs to benefit the social, educational and economic well being of young people living in the Canadian Arctic.

Participants can see a complete list if auction items here.