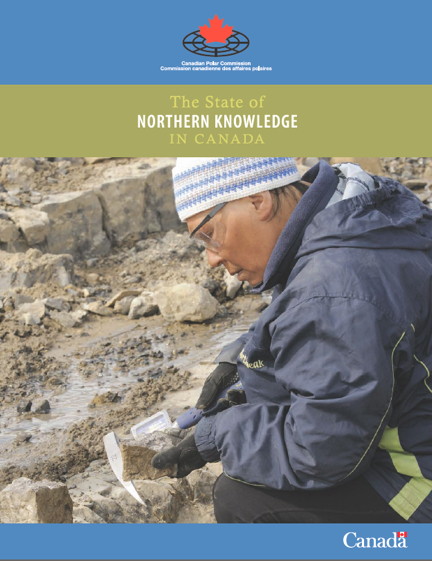 The Canadian Polar Commission’s new report, above, highlights several areas which require study and research in the north including the impact of large-scale resource development and strengthening human resilience.

For northerners to cope with the escalating wave of economic, social and climactic changes, scientists and researchers must learn to cooperate more — with each other and with northern stakeholders — says a new report from the Canadian Polar Commission.

Based on interviews with more than 100 “subject matter experts,” two thirds of them northern-based, the State of Northern Knowledge in Canada report highlights many gaps where more “meaningful” research is needed to improve the lives of the nation’s Arctic peoples.

Meaningful research, the report says, requires those interested in northern science and development to talk to each other more, to share resources and data, to see the ways in which their studies overlap and to fully utilize the breadth of knowledge and expertise that already exists in northern communities.

Those interviewed identified a number of areas that desperately need comprehensive study, from mental health treatment and prevention to getting northerners better trained and into higher paying jobs in the resource sector.

Research into these areas is crucial as mining and oil and gas companies come looking for investment, as homes slump into the melting permafrost and as jails fill with offenders who are mentally ill, suffer from addictions or both.

Without baseline data, we won’t know what changes are happening and how quickly, the commission said.

In other words, it’s important to get it right and to do it now.

“Northerners have the greatest vested interested in northern research,” said the commission’s executive director David J. Scott, in a news release. “Therefore our study focuses on their perspectives on progress and future knowledge needs.”

The report, Scott says, points out ways to increase northern capacity and participation, “with a view to increasing northern involvement in research at all levels, from the establishment of policies and priorities to field work.

“The increased use of traditional knowledge of the region’s Aboriginal peoples is an essential part of that increased northern involvement.”

The Canadian Polar Commission, created in 1991, is the federal government’s clearing house for polar research. It monitors current studies, works with local and international bodies to facilitate cooperation and determine priorities and provides advice to Aboriginal Affairs and Northern Development.

Resource development is coming, the report says, and it will have both positive and negative impacts on northern communities.

Aside from finding ways to get northerners trained, recruited and retained in the resource sector, local people are also concerned about how all that development will change their families and their land.

“The extent of resource development in the North is creating a continued need for ever more varied and detailed baseline data to better assess change, to appropriately regulate development, to guide adaptive strategies and minimize negative impacts,” the report says.

This must be done in light of the cumulative effects that resource development can have on people, animals and the environment, it adds.

“This includes the extent to which resource development activities may contribute to family breakdown, family violence and addictions.”

The sections on sustainability and resilience are particularly interesting, since they address topical issues such as housing, food security, mental and physical health, jobs and education.

When it comes to mental wellness, for instance, the study mentions many areas that need to be studied including suicide and Fetal Alcohol Spectrum Disorder or FASD.

“While little is known about the prevalence of FASD in northern correctional facilities, studies based on Canadian data suggest young people with FASD are as much as 19 more times likely to be incarcerated as those without in a given year,” the report says.

“There is a need for more research on FASD and the criminal justice system.”

Justice Robert Kilpatrick of the Nunavut Court of Justice pointed out Nunavut’s lack of FASD knowledge and services September 2013 in a sentencing judgment for a young man who suffered from FASD.

“There is no ability to diagnose, let alone treat, those citizens who are damaged by alcohol abuse during pregnancy,” Kilpatrick said.

The last section of the report deals with research pertaining to climate change and how northerners can help to direct future study on the subject.

Much is needed, the report says, to understand the profound consequences which will occur in the coming decades and to adapt to them.

The current precarious state of various northern caribou herds was singled out as an area of great significance for northerners but sorely lacking in basic data.

The report calls for further research into, “wildlife population sizes, trends and geographic ranges of animals, and the impacts of habitat alteration and other ecological changes in order that rapid declines can be detected before populations become threatened.”

Northern peoples can play a significant role in climate change monitoring and adaptation, the report adds, so long as they are brought in as partners from the outset, and not simply as token advisors.

Go here to download a copy of the report.