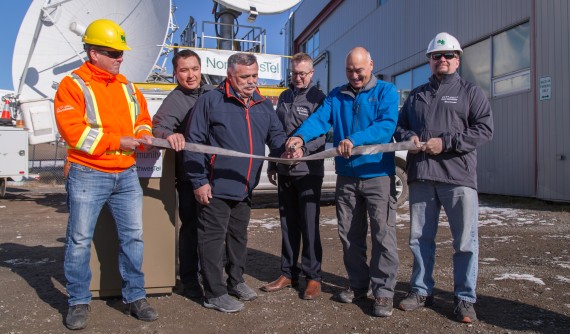 The company announced its new broadband internet service, Tamarmik Nunaliit, at a sealskin-ribbon-cutting ceremony on Monday morning. In English, the name means “every community.”

The service should be available to every Nunavut community by the end of 2019, the company said.

Currently, the fastest internet connection the company offers is five megabits per second, for $179.95 per month. That package will still be available, but its cost will drop to $80 a month.

The new, faster internet package will offer speeds of 15 megabits per second, for $129.95 a month.

The new packages will also double the limits for monthly data usage. There will now be an option for a monthly cap of 100 GB.

Details of the new plans are available on Northwestel’s website.

With $49.9 million in funding from the Government of Canada, Northwestel is building new satellite stations and network hubs in each of Nunavut’s 25 communities.

The new Ka-band satellite connects to a satellite network that will provide up to 20 times the internet capacity to communities in Nunavut.

As well, the company is preparing to offer 4G LTE wireless service in all 25 Nunavut communities by the end of 2019.

“I think it will have a lot of great benefits for people living in Iqaluit and all across Nunavut,” Matt Wallace, manager of external communications at Northwestel, said in a phone interview on Monday.

Northwestel’s competitor, SSI Micro, operator of the Qiniq network, has already started offering wireless voice and data service across Nunavut, and now reaches 15 communities as SSI Micro continues to roll out the service.

Iqaluit residents can pre-order their services from Northwestel at the Iqaluit trade show this week, the company said.