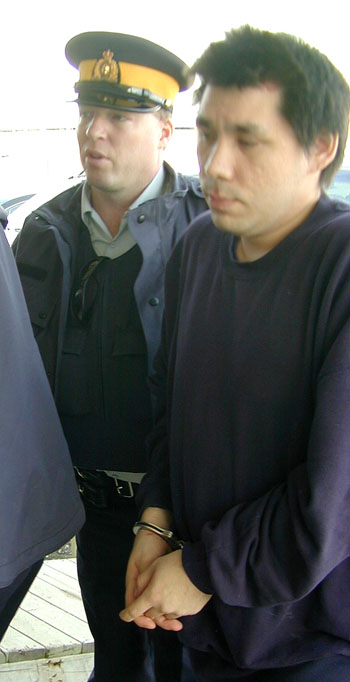 Mark King Jeffrey is led into a police vehicle, in an undated file photo. The notorious killer died June 29 at the age of 34. (FILE PHOTO)

A Nunavut man who stabbed 13-year-old Jennifer Naglingniq 31 times in her Iqaluit home in 2002 has died in his jail cell.

“Staff members immediately began performing CPR and emergency services were called. The inmate could not be resuscitated,” a June 30 Correctional Service of Canada news release said.

Jeffrey was sentenced to life in prison in 2007 for second-degree murder.

According to his sentencing, he could have been eligible to apply for parole by 2017. Parole decisions are made by the National Parole Board.

That’s because his sentence was dated from the time of his arrest in April 2003. Decisions on parole applications are made by the National Parole Board and there is no guarantee he could have been released.

There is no information in the CSC news release on the cause of Jeffrey’s death — if it was by suicide or some other cause.

“As in all cases involving the death of an inmate, the police and the coroner have been notified, and Correctional Service Canada will review the circumstances of the incident,” the news release said.

At his sentence hearing in 2007, Justice Earl Johnson described his crime as “one of the most savage murders in the history of the Northwest Territories and Nunavut.”

Jeffrey, who smoked crack prior to the murder, began stabbing Naglingniq inside her home on the evening of Dec. 6 2002 with a steak knife.

Cuts on Naglingiq’s hands suggested she fought back.

In the act of stabbing the Grade 8 student, Jeffrey broke the steak knife, but went back to the kitchen and grabbed another knife and continued the attack.

After she was dead, Jeffrey pulled down her pants to make it look as if she had been sexually assaulted — although he did not rape his victim.

Only months later did Jeffrey plead guilty to second-degree murder, in exchange for his first-degree murder charge being dropped.

Jeffrey apologized to the family and regretted his actions in a statement.

Jeffrey’s defence lawyer at the time said he had a tough childhood, marred by drugs, alcohol and sexual and physical abuse.