“They should be designated as a special management area” 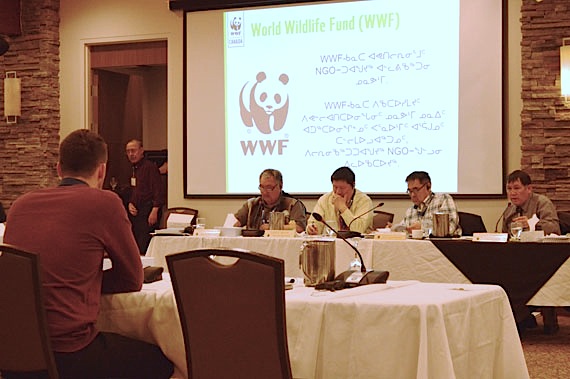 Future development in Nunavut could threaten the stability of polar bear denning areas, and the Nunavut Planning Commission isn’t doing enough to prevent that from happening in its current Land Use Plan draft.

That’s according to the World Wildlife Fund, which added its voice to a chorus of government and Inuit organization condemning the current designation of denning regions as “mixed use” under the draft land use plan, during an NPC-hosted public hearing in Iqaluit, March 24.

“Polar bears are sensitive to disturbance when denning and the current draft has no designation for polar bears in terms of a special management area or a protective designation,” WWF-Canada’s senior specialist for Arctic species and ecosystems, Brandon Laforest, told NPC planners.

The NPC released a draft of its land use plan last summer, which—when further consultations and rewrites are completed—will act as a resource and land development guide for the Nunavut Settlement Area.

A “mixed use” designation takes into account conservation initiatives and social uses, but also leaves the door open for economic activities, according to the plan’s executive summary.

“There’s widespread agreement from participants, including Nunavut Tunngavik Inc., the regional [Inuit] organizations in their joint submission, the Qikiqtani Wildlife Board and the Government of Nunavut that additional measures are necessary to safeguard denning areas for polar bears,” Laforest said.

The NPC ruled against any special designation while preparing its draft land use plan, arguing “the information provided to the NPC on polar bear denning areas was not sufficiently precise to allow the NPC to recommend land use designations in specific locations.”

Laforest admitted that denning regions for polar bears are extensive, but recommended that further consultation with communities could whittle down the locations.

“These areas need not be set aside for 12 months of the year, they’re used at a very specific time of the year,” he said. “They should be designated as a special management area.”

The WWF’s recommendations follow similar ones already submitted to the NPC regarding dens.

The GN also advocated for special management areas around polar bear denning sites, but added NPC should at least inform proponents interested in development projects near polar bear habitats that unlawful destruction of carnivore dens is illegal under the Nunavut Wildlife Act.

The Government of Canada deferred to the GN’s recommendations in its written submission on denning areas.

In a joint submission to the NPC, NTI and Nunavut’s three regional organizations argued that by placing polar bear habitat in a mixed-use designation, the NPC was contradicting statements made in its draft land use plan that polar bears are important to Inuit culture.

NTI is also calling on the NPC to work with local hunting and trapping organizations and regional wildlife organizations to locate and identify potential bear dens.

Any bear den would “require that a one-kilometer exclusion zone be observed around every known, recorded polar bear den between Sept. 15 and April 15,” the submission said.

While polar bears remain the poster-animal for southern climate change advocacy, recent studies indicate bear populations in the Eastern Arctic are at least stable, if not increasing.

In Nunavut’s Kivalliq region, polar bear populations have increased to the point that neighbourhood watches have been started in some communities—such as Arviat.