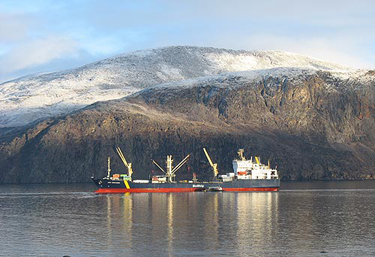 Nunavut Sealink and Supply Inc., a joint venuture between Arctic Co-ops Limited, and Desgagnés Transarctik Inc., announced May 29 that it won the Government of Nunavut contract to provide sealift service in the GN to 25 of 26 Nunavut communities.

The long-term GN-NSSI agreement is effective as of the 2012 sealift season, a company news release said.

Cargo to all communities will be for the most part loaded from dock facilities in Ste-Catherine, located south of Montreal along the St. Lawrence Seaway.

NSSI’s operations at the port of Churchill will continue with the collaboration of Churchill-based Nunavut Connections, a majority Inuit company with shareholders from the Kivalliq and Baffin regions, in partnership with OmniTRAX Canada, which will oversee loading vessels and co-ordinating the movement of fuel and freight from Churchill to destinations in Nunavut.

Kivalliq Marine will work with customers in the communities, and will manage the movement of cargo by truck and rail from Winnipeg and Thompson to its warehouse in Churchill. NSSI will then move cargo, via barge and sea-going ship, from Churchill to destinations in the Kivalliq.

Qikiqtaluk Corporation and Sakku Investment Corporation joined the NSSI partnership this past April.

QC and Sakku, the development arms of the Qikiqtani and Kivalliq Inuit organizations, said the deal would give Inuit beneficiaries in both regions shares and voting board positions with NSSI.

Nunavut Eastern Arctic Shipping, a partnership that includes Tukimut of Iqaluit, was awarded the GN sealift contract for Iqaluit this past April.

NSSI said, however, that it will continue to serve Iqaluit outside of its blanket agreement with the GN, and is available to sign sealift contracts with individual customers.