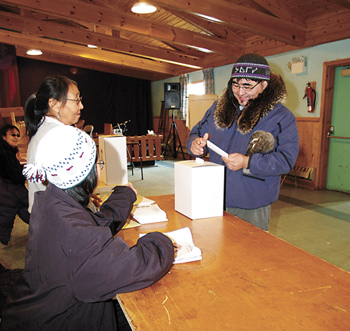 James T. Arreak, a candidate for vice-president in Nunavut Tunngavik Inc.’s 2008 elections, votes at the Parish Hall in Iqaluit that year. (FILE PHOTO)

That’s one of the documents candidates are required to submit as part of the nomination process — and the RCMP must do your criminal record check within 90 days of the election’s nomination period.

NTI’s by-laws outline how certain types of charges or a recent prison sentence could disqualify a candidate from running.

“No person who has been convicted of an indictable offence, or whose imprisonment as a result of such a conviction ends within the three years immediately before the voting day, is eligible to be a candidate for election as an officer of Nunavut Tunngavik Incorporated,” organization’s by-law reads.

Indictable offences are the most serious offences under Canada’s criminal code — offences like theft over $5,000, aggravated assault or even murder — and they come with more serious punishments.

But NTI’s chief returning officer said that until now, candidates haven’t had to provide evidence about their criminal records.

“What has happened is that in nomination papers, some candidates have just claimed that they haven’t been charged or served jail time,” Nancy Karetak-Lindell said.

“So we’re asking for more concrete proof,” she said. “It’s not really a change in criteria, but a change in process.”

To ensure the criminal record check is up to date and ready to submit ahead of the election nomination period between Oct. 27 and Oct. 31, the record check must be completed after July 27.

Potential candidates can do that by picking up a form at their local RCMP detachment, although the RCMP must mail the completed forms to an Ottawa processing centre.

There, the person’s name is run through a national database where any criminal history is flagged. Results are then mailed back.

“You have to mail it — there’s no shortcut,” Karetak-Lindell said. “That’s why we’re asking people to do it now.”

On Dec. 8, NTI will hold an election to fill two vacant or expiring vice-president positions.

That’s because NTI’s board of directors has approved a change that would see the organization’s two vice-president positions rolled into one.

Eligible candidates and voters must be Canadian citizens, at least 16 years of age by Dec. 8, 2014 and enrolled under the Nunavut Land Claims Agreement.

In addition to its criminal background requirements, no candidate who is indebted to NTI or a regional Inuit association in the amount of $500 or more can run in the election.

Nomination forms can be obtained from the chief returning officer, community liaison officers, or NTI’s website when nomination period opens.