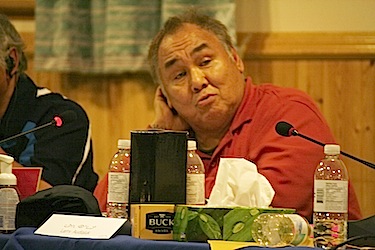 To witness the extremely high cost of living in the High Arctic Larry Audlaluk of Grise Fiord, a delegate to Nunavut Tunngavik Inc.’s annual general meeting, suggests that NTI visit his community. (PHOTO BY DAVID MURPHY)

Before adjourning to their next annual general meeting, Oct. 22 to Oct. 24, 2013 in Rankin Inlet, delegates to Nunavut Tunngavik Inc.’s AGM in Iqaluit weighed in on many issues by way of resolutions that they passed late Oct. 25.

Among issues dealt with in resolutions:

• Social services: delegates supported a resolution that calls for a transformation of the social services sector so it better represents Inuit, as well as a revamped foster child placement system. The goal: to preserve and promote Inuit language, culture and traditional values among children and keep Inuit children in Nunavut;

• Walrus meat: delegates want a meat testing laboratory in Nunavut for walrus and other country foods, similar to the lab at the Nunavik research centre in Kuujjuaq. They said laboratory results are not always provided on a timely basis to hunters, so they can know more quickly whether, for example, walrus meat is infected with the worm-like parasite that leads to potentially lethal trichinosis outbreaks;

• Increased financial support for bodies that represent elders, women and youth and a separate call for youth centres in each Nunavut community; and,

• Money: the delegates approved NTI’s budget and asked through a separate resolution for more money to the Inuit organizations to cover future projected shortfalls.