“If Nunavut is to be truly an open society, than we need to communicate” 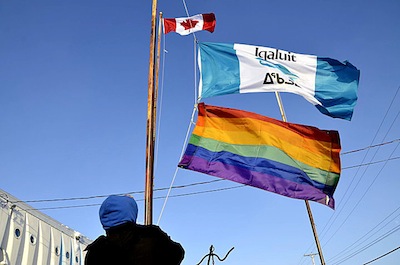 Cathy Towtongie, the president of Nunavut Tunngavik Inc., says she will not apologize for remarks made about the rainbow flag raised at Iqaluit city hall last month.

At an Iqaluit meeting of Baffin mayors March 5, Towtongie commended Iqaluit city councillor Simon Nattaq for speaking out against the decision to raise a rainbow flag outside of Iqaluit city hall during the recent winter Olympics.

“The Inuit culture have had no time to discuss same sex,” CBC Radio reported Towtongie telling the mayors meeting March 5. “In fact it was an agenda that was hijacked and there was the excuse of [homophobia] which Inuit should have had time to digest.”

The rainbow flag, a symbol of quality and inclusiveness, particularly in the lesbian, gay, bisexual, transgendered and queer community, was raised in Iqaluit Feb. 10 at the request of Coun. Kenny Bell.

But at a Feb. 12 city council meeting, Coun. Simon Nattaq said the decision to raise the flag should have come to council.

Nattaq said he was contacted by a number of constituents who disagreed with the city’s decision to raise it. “People tell me it is not an Inuit custom to be gay,” Nattaq told council in his member’s statement.

As response to Nattaq’s comments came swiftly, so did the public reaction to Towntongie’s March 5 statement.

In a letter to Towtongie, Iqaluit resident Laakkuluk William Bathory expressed shock that the president of Nunavut’s birthright organization would “spread such prejudice, hate and misinformation.”

“The prejudice you showed to fellow Inuit and to other human beings is not fit for your very important position in society,” Williamson Bathory said. “Your forceful voice could be used to unite Inuit rather than tearing the hearts out of people you do not feel affinity with.”

“As someone that grew up with you and someone who shares the work you do for Inuit, I would like to ask you to publicly apologize for your statements and further to this, announce love and respect for all and everyone living Nunavut — that is my understanding of Inuit values,” she added.

Towtongie’s response to Williamson Bathory’s letter came just as quickly, calling on Nunavummiut to talk about the issue of sexual orientation without fear.

“If Nunavut is to be truly an open society, than we need to communicate to understand the changes affecting the Inuit society, cultural and traditionally,” Towtongie said in a response to Williamson Bathory’s letter, which was shared with Nunatsiaq News.

“In saying that, I will not apologize… because my comments were just that no more and no less.”

In a March. 6 release, NTI reiterated its policy to “promote the rights and opportunities of the Inuit of Nunavut as a whole, and fair treatment of disadvantaged groups within the Inuit population, respecting the dignity of every person and avoiding discrimination based on race, national or ethnic origin, color, religion, sex, sexual orientation, age, or mental or physical disability.”

“NTI as an organization and I myself as an individual have always supported the rights and struggles of all disadvantaged groups in our society,” Towtongie said in the release. “At NTI, we always promote an atmosphere of inclusivity, acceptance and tolerance.”