Nunatsiavut man to embark on month-long trek to Nunavik 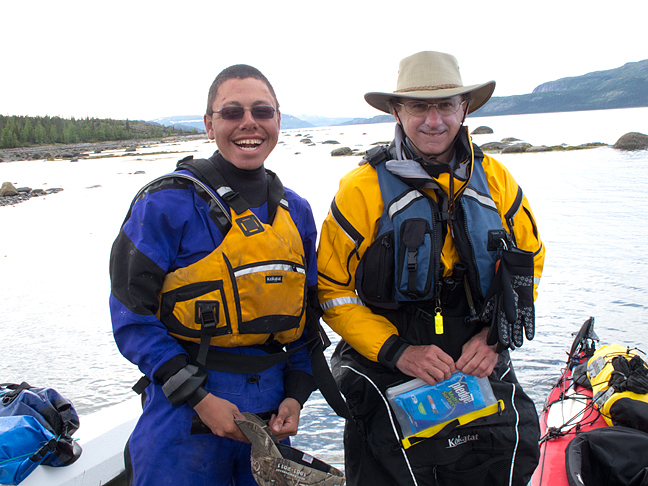 On Feb. 18, 24-year-old Noah Nochasak and accomplished Arctic traveller Jerry Kobalenko will leave from Nain to travel on foot to Kangiqsualujjuaq, at the mouth of the George River, with some 225 pounds of gear between them. (PHOTO COURTESY OF JERRY KOBALENKO)

A young Inuk from Nain, Labrador, plans to use a blend of traditional and modern skills to fuel a month-long walking expedition to Nunavik.

On Feb. 18, 24-year-old Noah Nochasak and Arctic traveller Jerry Kobalenko will leave Nain to travel on foot to Kangiqsualujjuaq, at the mouth of the George River – each toting 225 pounds of gear behind them.

But there’s little ego involved in this 550-kilometre trek: Nochasak hopes to complete the trip as a way to connect him to the land his ancestors grew up on.

His goal?: “To prove what matters most,” said Nochasak, who works at a Nain radio station.

Nochasak, the son of a Hebron-born Inuk father and a Nova Scotia teacher, was born in Nain, where he spent part of his childhood.

But he spent a larger chunk of his life in Northern Ontario, and then Ottawa, before deciding to move back to Nunatsiavut about four years ago.

Nochasak wanted to be closer to his family there, and once he settled back in, he realized that he wanted to learn more about a way of life that was quickly fading in Nain – that of the traditional Inuit culture.

Nochasak said he began to pick up a lot of advice from his father and other hunters in the community about travelling and the way traditional tools are used to survive on the land.

He soon found that preserving that knowledge of the past was what “mattered most” to him.

Nochasak began to make his own tools – qamutiit, harpoons, qulliit. He was the first local resident in many decades to construct a traditional qajaq.

“Even though traditional skills are probably strongest in Nain (out of Nunatsiavut’s five communities) only a handful of people know how to make them,” Nochasak said.

“We have tourists coming up to do kayaking expeditions here, which is weird, since we hardly practice that form of travel any longer.”

That’s how Nochasak first came across writer and photographer Jerry Kobalenko, when Kobalenko and his wife came to kayak Labrador’s coast in 2011.

Kobalenko, who has twice trekked from Churchill Falls to Nain, spent the summer kayaking from Nain south to Rigolet.

Nochasak took interest and joined the couple for part of the trip down the coast.

Nochasak said he was impressed with Kobalenko’s ability to navigate on the land and sea, a skill Nochasak was keen to improve.

In the winter of 2011, Nochasak attempted the trek to Kangiqsualujjuaq alone with a qamutik loaded with supplies over mountainous terrain. But he realized two weeks into the trip that the expedition was too difficult for him to continue on solo.

So he began to plan for another walking expedition towards the Nunavik community at the mouth of the George River, one that would take him over lakes rather than directly through the Torngat mountains.

“Originally, I wanted to do a strictly Inuit trip,” Nochasak said. “I needed someone beside me to help me cope with the stress of being out on unfamiliar land.”

But when Nochasak couldn’t find a fellow Inuk to travel with, he asked Kobalenko, who agreed to join him.

The two have different approaches to long-distance Arctic travel, but both feel the other has something valuable to bring to the experience.

“I feel a little better prepared having such a good partner,” Nochasak said.

Nochasak and Kobalenko plan to each haul 225 pounds of gear over 550 kilometres – a trip they estimate will take about a month to complete.

But Nochasak’s gear will differ slightly from Kobalenko’s: he plans to stock up on country foods to sustain him.

“Food is very important to me and I’ve tried lots of kinds,” he said. “But what works best for me is caribou and seal. They give me the energy I need to haul gear 10 hours a day.”

Most of the country food will be packaged in advance, but Nochasak also plans to hunt along the way.

While Nochasak plans to wear traditional clothing like kamiit to protect his feet, the pair will sleep in a modern tent, pull fibreglass sleds and use a gas stove. (Nochasak’s handmade qulliq proved to be too time-consuming on his last trek.)

But Kobalenko, 55, who has completed some 30 Arctic expeditions, says he’s impressed with Nochasak’s enthusiasm and traditional approach to long-distance travel.

“Noah is the first Inuk I have met who is interested in doing long-distance travel,” Kobalenko said. “He’s bright and enthusiastic and he’s trying to connect with roots, like not many are.“

“I think we’re both scared of not being able to keep up with each other,” Kobalenko laughed. “I’m hoping we can combine our skills. If he can take some of my modern experience and adapt it to his traditional lifestyle, that’s great.”

Nochasak chose Kangiqsualujjuaq because of its proximity to Nain, but also because it’s a popular destination for Nunatsiavut travellers year round.

Nochasak’s father makes the trip to the Nunavik community at least once a year, he said.

Once he arrives in Kangiqsualujjuaq, Nochasak hopes to visit for a few days and brush up on his Inuktitut.

Nochasak and Kobalenko will get some of their transportation subsidized by Air Labrador, Makivik Corp. and the Canadian Rangers.