“We know what people’s priorities are now” 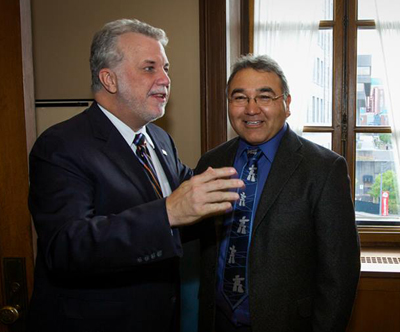 In its first sit-down meeting with Quebec premier Philippe Couillard Oct. 8, Nunavik’s leadership laid out some of its concerns and wishes as the province moves to ramp up its Plan Nord.

Quebec’s Liberal government, elected this past April, said the bill’s introduction signals its intent to revive the Plan Nord and make it a key factor in growing the province’s economy.

But not to the detriment of the region, said Makivik Corp. president Jobie Tukkiapik, following that Oct. 8 meeting in Quebec City.

“We’re not opposed to development, but we feel like we need to be fully involved,” said Tukkiapik. “There needs to be a sense of belonging.”

While Nunavimmiut were unprepared to respond to Plan Nord when it was first launched under the Charest government, the region has a much clearer idea of what it wants this time around.

That’s because a number of regional organizations undertook a region-wide Parnasimautik consultation to understand how Nunavimmiut want to move forward.

The final Parnasimautik document has not been released — it’s due out later this fall, Tukkiapik said — but “we know what people’s priorities are now,” he said. “Our culture and language cannot be lost.”

Tukkiapik also pointed to housing and education as important issues in Nunavik.

In terms of environmental protection, Tukkiapik said he’s encouraged by this Quebec government’s willingness to set aside 50 per cent of the region for protection, and a recent decision to temporarily suspend mining rights in part of the Kovik River basin, in the northwestern corner of Nunavik.

The government said it will invest in a Plan Nord development fund to finance infrastructure projects: $63 million this year and up to $2 billion by 2035.

But while the price of metals remains low, Quebec will take its time before it ramps up any programs to encourage resource develop in the province’s North.

At the Oct. 8 meeting, officials from Makivik and the Kativik Regional Government also pressed Quebec for support towards its Saqijuq social regulation project, which aims to keep Nunavik’s offenders out of jail, as well as high-capacity internet for the region.

“We are committed to our communities and our way of life,” said KRG chair Maggie Emudluk in an Oct. 8 release.

“Government resources are now needed to implement actions that will reinforce the social fabric and development of our communities.”

Although Quebec made no commitments to the region, Tukkiapik said he saw “an openness” on the part of the Couillard government to work together.