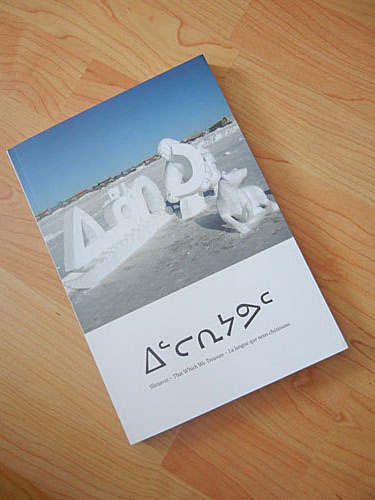 Nunavik’s Avataq Cultural Institute published a trilingual report on the work of the Inuktituurniup Satuurtaugasuarninga project, which provided a focus for discussions at last month’s language conference in Kangiqsujuaq. (FILE PHOTO)

Major organizations in Nunavik should “gather at their earliest convenience to create a concrete action plan” to save Inuktitut in the region.

That’s what delegates at the recent Annatuinniniq Uqausittinik, or saving our language, conference on Inuktitut in Nunavik want to see.

Youth at the conference, held April 15 to April 18 in Kangiqsujuaq, say Inuktitut is changing “in a radical way” and that English is too often spoken at home.

During a youth panel discussion at the conference, participants all used digital tablets to take notes — but some recorded notes in Inuktitut syllabics, while others opted for roman orthography.

Among the reasons many chose English or Inuktitut written in roman orthography: the ease of writing and the lack of Inuktitut terminology.

Youth at the conference said they want new words for new realities, said a news release from Avataq Cultural Institute, which organized the gathering.

But some elders said that they can’t understand youth when speaking Inuktitut, due to their anglicized grammar and lack of vocabulary.

Youth delegates also said they would like to see young people in Nunavik speaking better Inuktitut.

And, to help that, they’d also like to see older, more competent Inuktitut speakers correct their speech in “a positive manner.”

More than half the 60-plus delegates and other participants at the Annatuinniniq Uqausittinik conference were young Nunavimmiut.

The project’s team members visited every community in Nunavik as well as Chisasibi, a largely Cree community with a small Inuit population, asking such questions as “do you think the Inuktitut language has a future?”

For their Illirijavut report on the project, which received money from the federal and provincial governments, the project team produced statements, about 100 in all, such as “early warning indicators of the dangers Inuktitut faces in the modern world.”

At the end of the conference, delegates approved a resolution that calls for more resources “to assure a healthy future” for Inuktitut.

• an Inuktitut place of learning;

• a youth theatre, recognized during the conference “as a means of choice to transmit the culture and language;” and,

• more interactions between elders and youth.