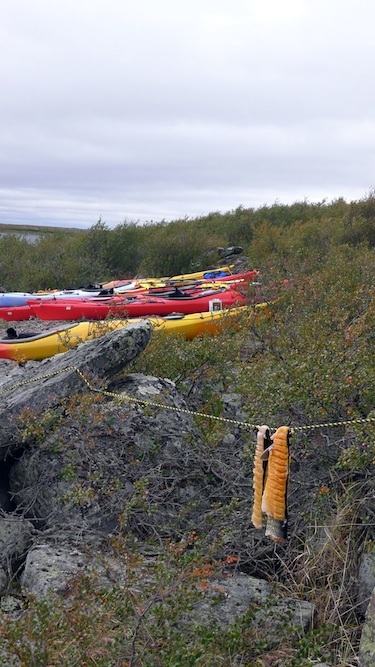 Traditional activities are an important component of the cadet program; here cadets hung Arctic char up to dry at a campsite along Diana Lake. (PHOTO COURTESY OF THE KRG) 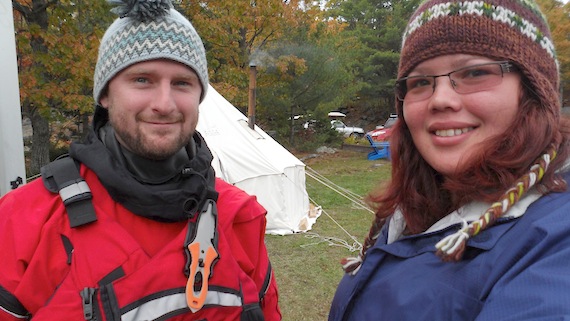 Conor Goddard, left, a cadet technician and Mae Ningiuruvik, a counsellor, work with the 44 Nunavimmiut youth who take part in the Kativik cadet program. (PHOTO COURTESY OF THE KRG)

And it wants to do more.

The Kativik cadet program is encouraging Nunavimmiut aged 14 to 18 to apply to take part in the program, which aims to promote policing and community service across the region.

Thomas Nashak, an 18-year-old from Kuujjuaq, has been with the cadet program since it began in 2009, taking part in anything from physical training, to community safety programs to visiting elders in the community.

“It’s been great,” Nashak said of his part-time job — a mix of volunteer and paid work for $15 an hour

Some of his most memorable moments include a visit to the Torngat National Park, where he and a handful of people scaled Mount D’Iberville, eastern Canada’s highest peak.

Nashak also paddled 45 kilometres along Diana Lake this past summer, hunting ptarmigan and catching the largest lake trout of the group.

His cadet colleague, 17-year-old William Arreak, said he prefers the survival skills the program teaches him.

“I like when we get to go out on the land and make igloos and do all kinds of survival techniques,” he said, recalling ice safety training in Puvirnituq.

Conor Goddard, who has worked as a cadet technician with the program since its inception, said he sees cadets gaining both practical and personal skills.

Following the trip to Mt. D’Iberville, for example, one cadet went back to the park to work as a guide

“From a leadership perspective, it’s really rewarding,” he said.

Cadet activities are a blend of physical fitness and traditional activities, an important element that sets this cadet program apart from others across the country.

“It means a lot — holding onto our cultural identity can help you grow,” said Mae Ningiuruvik, 24, who works as a cadet counsellor. “It means a lot to the community, too.”

In a recent presentation to the KRG council meeting in Kuujjuaq, Ningiuruvik showed councillors photos of cadets’ activities; from cadets taking first aid and police training, to dogsledding to sharing baked goods with elders.

KRG chairperson Maggie Emudluk called the cadets “role models,” saying “we want to show other youth, if you can do it, they can do it too.”

The goal of the Kativik cadet program — to encourage more Inuit youth to come and work for the Kativik Regional Police Force — could soon become a reality.

The KRPF, created as an aboriginal police force in 1995, was to be run regionally with Inuit officers.

But, last year, there were only three Inuit police officers in the 66-member force.

Goddard and Ningiuruvik said they have started to see interest from cadets who began with the program in 2009, and are now looking at their career options.

“We’ve recently hired cadets who’ve said ‘I want to be a cop and I know this is the way to do it,’” Goddard said. “We’ve got lots of room and it’s a great way to meet other Nunavimmiut.”

Nashak is considering training to become a police officer after he attends college next year. Arreak says he isn’t sure, although policing is definitely an option.

Both will stay on as senior cadets now, a role they can stay in until they’re 21 years old.

There are currently 44 cadets across Nunavik.

About a third of the program is funded through the KRG’s sustainable employment department; the rest through the Ungaluk safer communities program.

For information on how to participate in the cadet program, click here. 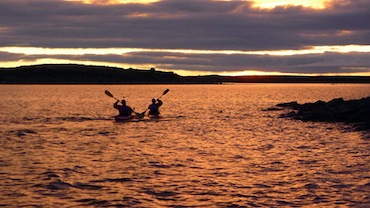 KRPF cadets kayaked 45 kilometres along Diana Lake this past summer, as one of the group’s many training and bonding activities. (PHOTO COURTESY OF THE KRG)