“My passion is to create” 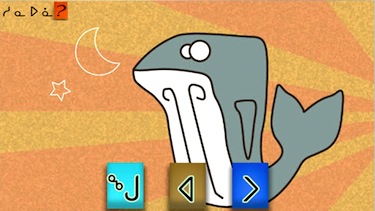 This image comes from the application or app for android telephone and tablet devices called “Sunaunaa? 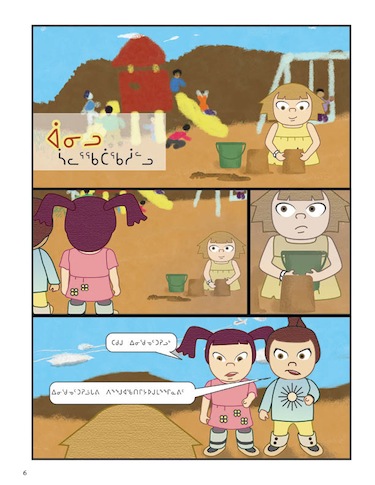 This comic by Thomassie Mangiok which deals with bullying is drawn in a style known as “manga,” which was developed in Japan. 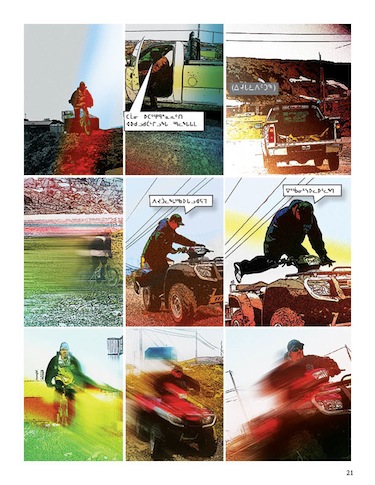 This page from Taikkua by Thomassie Mangiok deals with risky behaviour — and the comic later shows its consequences.

Nunavik graphic artist Mangiok says he’s on a quest to see Inuit in Nunavik use and keep their Inuit language.

Now, he runs his design and computer support company from his home town of Ivujivik on Nunavik’s Hudson Strait coast.

In Ivujivik, a community of about 400, Inuttitut is still the language spoken by most people in their daily life.

But even in Ivujivik, at the tip of Quebec, you can’t escape from English and French. The two dominant languages in Quebec are everywhere, in books, videos, on television and on cereal boxes — where you won’t see a word of Inuttitut to help you figure out whether what’s inside the box is good for you or not.

To carve out a larger place for Inuttitut in people’s lives, Mangiok devotes his spare time to producing online tools that teach Inuttitut and try to encourage its use by increasingly computer-literate youth in Nunavik.

The drive to promote Inuttitut has become a pastime as well as a passion, Mangiok said.

“I’ve been pushing for a culture and language,” said Mangiok, a father of two, who is also a commissioner with the Kativik School Board.

So far, Mangiok has produced the “first Nunavik-made” application or app for android telephone and tablet devices in Inuttitut, called “Sunaunaa?”

The free app encourages the user how to properly pronounce words in Inuttitut.

“Excellent,” comments one user about the app. “We need more tools like this for learning Inuktitut. It might be designed for children, but as someone just starting to learn Inuktitut I’ve found it very helpful personally as well.”

To register his app with Google, Mangiok had to pay about $400 out of his own pocket, but that’s okay, he said.

But that’s not the only online Inuttitut resource Mangiok has created.

He’s also posted a collection of six comic books on qanuuk.com to supplement the hard copies which have also been sent out to all Nunavik communities.

Mangiok said he started working the comics in 2009.

Developed with a grant from Ungaluk, Nunavik’s crime-prevention program, each comic’s story-line tackles a different theme, such as bullying, parenting, drug use, reckless behavior or selfishness.

In the comic on bullying, two girls pick on another little girl. She finally goes home to talk to her parents about the bullying – and they reassure her that “she’s okay.”

The comics’ styles range from typical “Superman”-comic style to a style closer to the “manga” graphic tradition from Japan.

The text: it’s all in syllabics.

Mangiok, who says “my passion is to create,” has also produced Inuttitut videos.

You can see two on kisiani. com or on YouTube.

Be warned you might fall in love with Inuttitut-speaking Nuqarit, “the talkative stop sign,” on another video posted on kisiani.com.

But preserving Inuttitut and other indigenous languages is no laughing matter.

Half of the world’s estimated 6,000-plus languages will likely die out by the end of the century without urgent efforts to protect minority communities and their languages, a United Nations independent expert said March 13.

“Language is a central element and expression of identity and of key importance in the preservation of group identity,” said Rita Izsák, as she presented her latest report to the UN Human Rights Council in Geneva.

“Language is particularly important to linguistic minority communities seeking to maintain their distinct group and cultural identity, sometimes under conditions of marginalization, exclusion and discrimination.”

This past February, the UN Educational, Scientific and Cultural Organization also urged the use of books and textbooks in local languages to support education in mother tongues.

UNESCO said translation into and promotion of local languages supports linguistic and cultural diversity and serves as the foundation for all social, economic and cultural life.