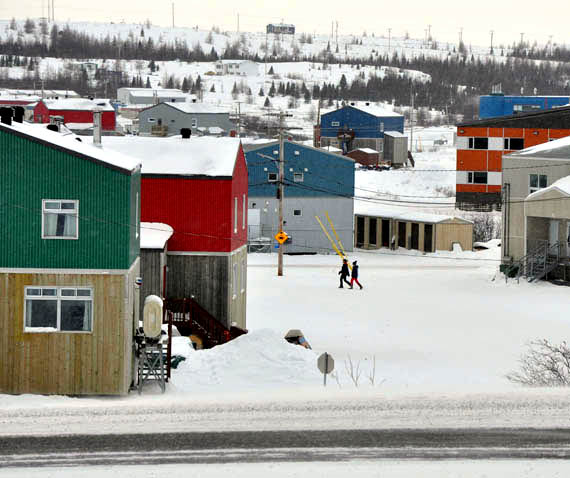 Nunavik health officials have made a formal request to the Quebec government to increase compensation for foster families in the region from an average of $25 a day to $100 a day, to help reflect the high cost of living in the region. (PHOTO BY SARAH ROGERS)

Nunavik continues to face a shortage of foster families, while the number of children placed in protective care in the region grows.

The Nunavik Regional Board of Health and Social Services said it’s working to beef up front-line programs and services to help prevent Nunavik children from being identified to youth protection.

At the same time, the health board is working to revise Nunavik’s youth protection services, with the goal of better adapting those services to Inuit communities.

But in the meantime, 444 Inuit children were placed under youth protection in Nunavik in 2017 with about 385 foster families.

Social services in the region prioritize placement with Inuit families in an effort to maintain a child’s ties to their culture and language.

“Unfortunately, major obstacles complicate that choice,” the health board said in a March 21 news release. “Inuit foster families notably offer their services in a generalized context of overcrowded housing.”

The health board does not provide statistics on the number of children who are placed with non-Inuit families or with families outside the region, to avoid “stigmatizing the clientele.”

Currently, a foster family caring for one child is eligible to receive an average of $25 a day.

But health officials have made a formal request to the Quebec government to see that increased to an average of $100 a day in Nunavik, the health board said, to help reflect the cost of living in the region.

The health board said it also plans to review the eligibility criteria for fostering Nunavimmiut children to help better understand the needs of those families.

Currently, these criteria ensure that children aren’t placed in a home where anyone has a criminal record related to sexual or physical abuse.

Foster homes must be clean and safe; for example, there must be a fully functioning bathroom and any firearms must be locked and unloaded. Foster children must have their own bed to sleep in.

That marks an opportunity for Nunavik to negotiate changes to section 37.5 of the act, which allows the province to enter into agreements with Indigenous communities to design and manage their own youth protection programs.

The health board has now launched that process with the help of a working group made up of representatives from each of Nunavik’s major organizations. The group is now preparing to sit down with Quebec officials to negotiate a plan.

Nunavik health officials said the goal is to dejudicialize youth protection measures and instead foster family and community intervention, much like the region’s family house model aims to do.

The Qamaarpik House in Kangiqsualujjuaq, for example, is staffed by a team of community health and social service providers, elders and educators who wanted to address the depression, addiction, post-traumatic stress and even incarceration that has prevented some parents from meeting their children’s needs.