“We rely heavily on non-Inuit professionals to provide primary care” 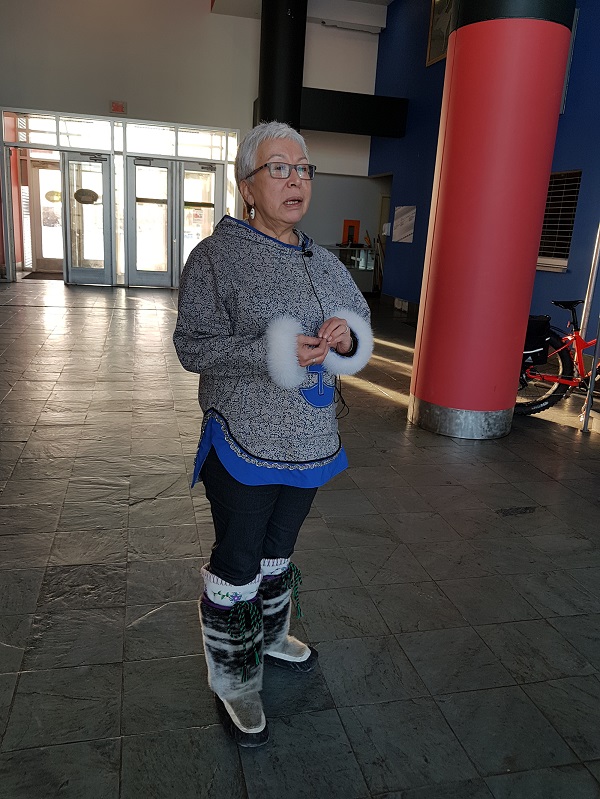 Minnie Grey, executive director of the Nunavik Regional Board of Health and Social Services, speaks to reporters outside Viens commission hearings on Nov. 23 at Kuujjuaq’s Katittavik town hall. (PHOTO BY SARAH ROGERS)

KUUJJUAQ—Nunavik health officials say they already have their work cut out for them, but, too often, the Quebec government is getting in their way.

Senior administrators from the Nunavik Regional Board of Health and Social Services appeared before the Viens commission in Kuujjuaq on Wednesday, Nov. 21, describing the number of challenges they face delivering efficient and relevant health and social services to Inuit in the region.

But with only 50 per cent of the health network’s positions filled by Inuit, the health board depends on southern hires, who stay in the region an average of 18 months.

Within that turnover, health and social service workers are struggling to provide baseline care, in addition to addressing suicide prevention, addictions treatment and youth protection.

“Our health and social services network is still failing to respond to all these issues,” said Minnie Grey, the health board’s executive director.

“We rely heavily on non-Inuit professionals to provide primary care in Nunavik. And we still have to send Inuit away from their families to receive proper care.”

The only thing that will change that is major investment from the province, she said.

The health board is not able to attract or maintain Inuit staff because of limits imposed by Quebec’s Ministry of Health, she said. Those include the difference in benefits offered to local staff compared to southern hires, who receive housing and flights home.

And Quebec legislation on professional orders, updated in recent years, also prevents Inuit from filling certain roles in the sector.

Nunavik health officials argue the gap in the level of proficiency an Inuk social worker may have compared to a university-trained one does not consider Inuit language, culture and knowledge as a credit.

To address that, a legislative committee within the health board has been drafting its own “bill” to replace the province’s health and social services act, proposed legislation it plans to submit to Quebec’s National Assembly in the new year.

“We’re hoping within the bill we can address that; to recognize an Inuk’s ability to give services, not just because they have a degree,” Grey said.

“We would like to address these issues where our values and practices are recognized.”

The document is not specific to staffing, but to the broad delivery of health and social services in Nunavik, based on Inuit principles originally captured in the James Bay and Northern Quebec Agreement.

The health board has also lobbied the provincial government to build a new regional hospital in Nunavik to host many of the specialized services that patients currently have to travel south to receive.

In response to the testimony from the health board, commission chair Jacques Viens said he hopes to see the National Assembly adopt the United Nations Declaration on the Rights of Indigenous Peoples.

“Obviously, this could lead to a lot more,” he said.

“A government must give appropriate services to its citizens. When we have people who speak the language and render those services, communication is a lot easier.”

“We can’t be tripping over procedures for this to work,” Viens said. “It’s time for this to move.

“This is the message I’m going to be sending to the government.”