“But you will see a difference” 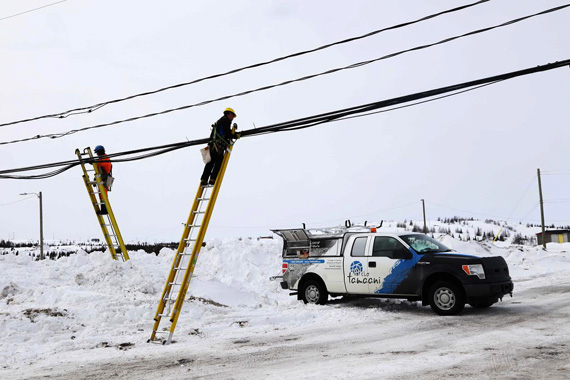 KUUJJUAQ—New and improved internet service is still en route to communities throughout Nunavik—it will just take a little longer than planned.

But the upgrade is now likely delayed until February 2017, while Tamaani awaits the delivery of the new technology.

Some of the new equipment has been held up in customs on its way North, said Daryl Combden, director of the Kativik Regional Govenrnment’s Administration department, which oversees the internet provider.

The upgrade was originally scheduled to be in place by mid-December.

“So we’re about six weeks behind schedule,” he told regional councillors in Kuujjuaq Nov. 28. “But you will see a difference, for sure.”

Regional councillors welcome the upgrade—many complained about spotty internet service and maxed out download caps in their home communities.

Tamaani customers won’t see a hike in price with the new bandwidth speeds, although faster, higher-priced internet packages will be available with the upgrade.

Once the new equipment arrives, Tamaani will send staff into the communities to host modem exchanges, when customers can bring in their old technology and receive a new one.

The current modems used by Tamaani customers have maxed out and won’t be able to handle the increased capacity, Combden said.

When Tamaani makes the actual switch to the new modems, customers may see an interruption to service, although Tamaani says that shouldn’t last more than a couple of hours.

While the switch will mean a significant boost to bandwidth, the KRG is already looking ahead to its next upgrade.

With plans to have a fibre optic network in place by 2021, the regional government has commissioned a feasibility study to look into the costs and efforts involved in linking fibre optic to Nunavik’s 14 communities, Deception Bay, four communities in Nunavut’s south Baffin region and two others in Nunatsiavut.