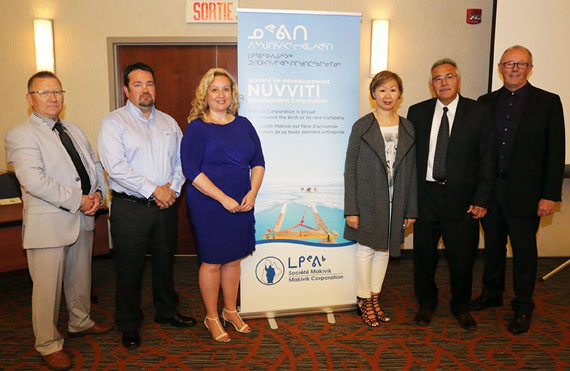 Makivik Corp. executives are pictured here with the newly-appointed board members of its new Nuvviti Development Corp., along with the new boards of directors for its airlines, Air Inuit and First Air. The new boards met in Montreal last week. (PHOTO COURTESY OF MAKIVIK)

Makivik Corp.’s new development corporation has its first board of directors in place, the Nunavik Inuit birthright organization announced this week.

The new entity will oversee the day-to-day operations of Makivik’s subsidiary companies and joint ventures.

Makivik put out the call for board members this spring, looking for a mix of Nunavik beneficiaries and business and investment experts.

“Our goal is to provide sound and professional management to our existing corporate portfolio, and ensure strong and stable growth going forward for the Inuit beneficiaries of the JBNQA [James Bay and Northern Quebec Agreement],” said Jobie Tukkiapik in a June 26 release.

Nuvviti’s new board members include:

• its newly-elected chairperson, Tommy Palliser: Inukjuak-based executive director of the Nunavik Marine Region Wildlife Board who holds a bachelor of commerce from Concordia University;

• Michele McKenzie: former CEO of the Canadian Tourism Commission and a consultant in business development; and,

• Steve Roussel: member of the Quebec Order of Engineers, with 25 years as a senior executive in the mining industry.

The new board is meeting for the first time in Montreal last week.

Since Nuvviti has formed, Makivik has already shed one of its long-time subsidiary companies, Nunavik Creations.

The company operated for 15 years, designing and producing traditional and contemporary Inuit clothing and accessories, though Makivik said it had reported losses for the last several years.

Among its subsidiary companies, the only two that won’t be overseen by Nuvviti are Makivik’s two airlines: First Air and Air Inuit.

The organization also announced new boards for each airline, replacing the Makivik executives that used to sit as directors.

With the creation of Nuvviti, Makivik’s elected executives will no longer serve as chairs or board members to their subsidiary companies.

First Air’s other board members include:

• Charlie Watt Jr: Kuujjuaq-based businessman with a focus in the mining industry;

• Patricia McLeod: lawyer specializing in corporate/commercial and securities law; and,

• Johnny May: veteran pilot from Kuujjuaq;

• Josepi Padlayat: vice president of the Nunavik Regional Board of Health and Social Services;

• Derek Nice: president of Consilium Technica Group, a consulting firm with a focus on the airline industry; and,

Makivik Corp. also announced new board members for its other subsidiary and joint venture companies.