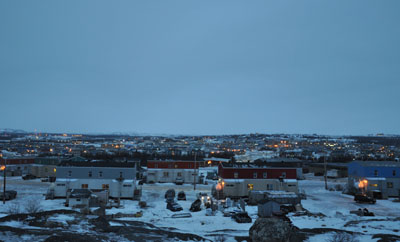 The federal government has allotted $50 million to housing in Nunavik, money that will help build up to 150 additional units in the region over the next two years, (PHOTO BY SARAH ROGERS)

Its housing crisis is far from over, but Nunavik’s leadership has welcomed a major injection of federal funding to build new housing units across the region.

The federal budget, handed down by Finance Minster Bill Morneau March 22, built in social housing commitments across the North, including $50 million for housing in Nunavik over the next two years.

“It’s not all of what we we’re looking for, but we are happy that we’re able to build over a 100 units over the next two years,” said Makivik Corp. president Jobie Tukkiapik. “We can only build on that.”

Through Nunavik’s tri-partite agreement with the federal and provincial governments, Ottawa’s portion delivers roughly 60 units to the region each year.

With this new funding, Nunavik could build as many as 150 additional units between 2017-18.

It’s still only a small portion of the 900 units the region has estimated it needs to properly house its population but Tukkiapik sees it as a positive first step under the new Liberal government.

Just a day before the budget’s release, Tukkiapik met with Indigenous and Northern Affairs minister Carolyn Bennett in Ottawa to discuss housing.

Makivik has had a prickly relationship with Ottawa over housing in recent years.

The organization has said that, by failing to fund the construction of housing over a six-year period in the 1990s, the federal government spurred a housing crisis that has today left 68 per cent of Nunavik’s population living in overcrowded housing.

But the Inuit birthright organization didn’t get very far on that file with Stephen Harper’s Conservative government.

Tukkiapik said the new government has so far been receptive to the region’s needs, although nothing concrete came from the March 21 meeting.

“There was no further commitment, but we will continue to pursue this,” he said.

The federal budget offered some other goodies to the region, including an increase to the Northern Residents Deduction which will put a little more money in the pockets of Nunavimmiut, Tukkiapik said.

But Makivik and other regional organizations are still waiting to see if and how other $96 million earmarked for Indigenous communities will reach Nunavik, money aimed at helping organizations better lobby their governments.

Romeo Saganash, the NDP MP for Abitibi-Hames Bay-Nunavik-Eeyou, said the budget fell short of his expectations and those of many of his constituents — the $96 million included.

“We need to carefully assess these numbers based on accuracy and in their proper context,” Saganash said in an email to Nunatsiaq News. (The MP has laryngitis and couldn’t speak over the phone.)

“The reality is that services and programs for Indigenous peoples are so under-funded that this budget is laughable.”

Saganash said the budget missed the mark on a number of other issues that he considers pressing in the riding: a lack of funding aimed a elders’ homecare; no restoration of Canada Post’s home mail delivery; little change to Nutrition North’s budget; and, zero invested in post-secondary education for northern regions.

“I want to see a university in the North before the next election,” Saganash said. “Youth should not have to leave their cultures and family support to travel to the South for school.”

One promising item to come from the budget, Saganash noted: $89 million to create or renovate 3,000 shelter spaces for women facing violence at home, support that’s desperately needed in many Northern communities which have few resources for those women.

But Saganash said the money is targeted to First Nations communities, which means Nunavik will be left out of that funding.