“It shouldn’t be the kids who are paying for it” 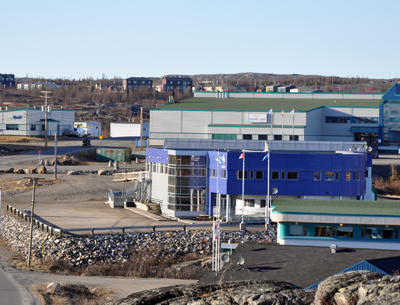 Ungava MNA Jean Boucher met with KSB officials in Kuujjuaq last week as both the school board and province work to bring back the secondary studies diploma, which Quebec stopped issuing to high school graduates in 2015. (PHOTO BY SARAH ROGERS)

KUUJJUAQ—Jean Boucher, the MNA for the Quebec riding of Ungava, says he’s working to ensure Nunavik high school graduates in the region can begin receiving secondary diplomas again next year.

Many Nunavimmiut only discovered earlier this month that since 2015, students who completed Secondary 5 through the Kativik School Board were receiving an Attestation of Equivalence of Secondary Studies, issued by Quebec, rather than the standard Secondary School Diploma.

That’s because Nunavik’s Secondary 4 level math and science programs do not meet Quebec’s education department requirements—and haven’t for some time. Boucher, like many others, said he only found out earlier this month, when he read a report in the Quebec newspaper Le Devoir.

“It was an administrative mistake, but it shouldn’t be the kids who are paying for it,” he said.

Boucher was in Kuujjuaq last week to meet with KSB officials. The Ungava MNA said he planned to discuss the issue with cabinet members in Quebec City this week.

“This is a file I’ll be following closely to make sure it moves forward,” he said. “They really want to have it solved for next year.”

The KSB said it has updated and submitted the new courses to Quebec’s education department, which is currently reviewing the proposed material, though the department hasn’t said how long it could take.

The school board has accused the province of neglecting its needs, which go beyond the issue of diplomas.

In February 2016, the KSB filed a judicial demand with the Superior Court of Quebec, arguing both the governments of Quebec and Canada have failed to respect their obligations to properly fund education in the region.

Among some of its points, the litigation highlights certain rights enshrined in the James Bay and Northern Quebec Agreement, including the school board’s ability to develop its own government-funded curriculum materials.

The lawsuit is ongoing, but since the diploma issued surfaced, Quebec has appointed a liaison in its education department to work directly with the KSB on Nunavik-related issues.

“We have to make sure someone is officially [dedicated] to follow those files and make sure nothing falls through the cracks,” Boucher said.

The KSB was also in talks with the province about creating a Nunavik-Quebec roundtable on education, although Boucher said he hasn’t heard any developments.

Nunavimmiut still have questions about what will happen with the roughly 100 students who have received equivalency certificates so far—not to mention a new crop of students set to graduate this month.

Last week, Makivik Corp. president Jobie Tukkiapik called for an audit of Nunavik’s education system during a radio interview aired throughout the region, to ensure the system is working to its full potential.