Tamaani Internet to end contract with Telesat, partner with SES 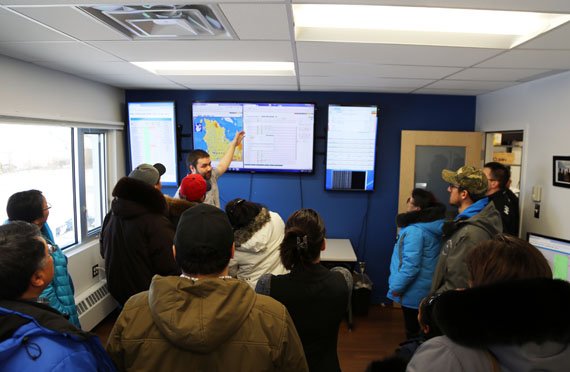 KRG councillors and executive members tour Tamaani’s headquarters in Kuujjuaq Nov. 25. The KRG-run provider will soon partner with satellite operator SES to upgrade its network from current speeds of 1.5 megabits per second. (PHOTO COURTESY OF KRG)

KUUJJUAQ — The Kativik Regional Government has awarded a contract for new satellite services that could triple the amounts of bandwidth available across Nunavik by the end of next year.

The KRG, which runs Nunavik’s Tamaani Internet, will finish its contract with Telesat and then partner with SES to upgrade its network from current speeds of 1.5 megabits per second, KRG councillors heard Nov. 25 at their meeting in Kuujjuaq.

Following a thorough bid evaluation, satellite operator SES’s winning bid came in at $15.7 million — roughly half of what the KRG budgeted for the upgrade.

With the money it’s saved, Tamaani will gain the means to bring its bandwidth up to four megabits per second by September 2016, said Daryl Combden, who heads the KRG’s administration department.

The KRG received $26 million from both the provincial and federal governments this past July to help overhaul and maintain broadband service in the region’s 14 communities until 2021.

It’s that upgrade that will also set the basic groundwork for a move up to 4G technology, which means a major upgrade to wifi across Nunavik.

To facilitate that, the KRG has also signed a service agreement with Ice Wireless on a 4G pilot project. If all goes well, Nunavimmiut will be able to use smartphones and access data in each of the region’s 14 communities by next year.

“In addition to providing faster internet to your home, you’ll be able to move through the community and access data,” Combden said.

“You’ll be able to go to your local co-op, take a photo with your phone and send it over the internet.”

In partnership with Lynx Mobility, Makivik Corp. subsidiary Nunacell currently delivers 2G cell phone service to four Nunavik communities, but that agreement comes to an end at the end of the year.

Nunacell intends to upgrade its cell service under a new provider, but Makivik hasn’t yet confirmed if that provider is Ice Wireless.

While Tamaani has opted to extend satellite service for now, the regional government is still looking ahead to connecting Nunavik to a fibre optic network.

As part of the provincial government’s re-launched Plan Nord last spring, Quebec has committed to funding a full feasibility study to look at bringing fibre optic to the region.

“In the meantime, we’re not giving up on work or negotiations towards a long-term solution,” Combden said.

“I can’t tell you when it’s going to come or at what cost, but we’re working on it.”

Kuujjuaq will have its own local fibre optic network up and running in a few weeks, the KRG said, a project that will also be installed in Inukjuak, Puvirnituq and Salluit next year.

The fibre optic won’t change the bandwidth in those communities, but will help avoid congestion on the local network, especially during peak periods.

Tamaani, which launched in 2004, now counts 3,000 customers across Nunavik.

But every month, the internet provider says between 600 and 700 users get cut off because they don’t pay their bill.

“That’s about a quarter of our users,” Combden said, noting the time it takes for staff to respond to calls to update accounts and re-connect customers.

“We’re asking people to really pay attention to their bills, pay on time and avoid getting cut off.”