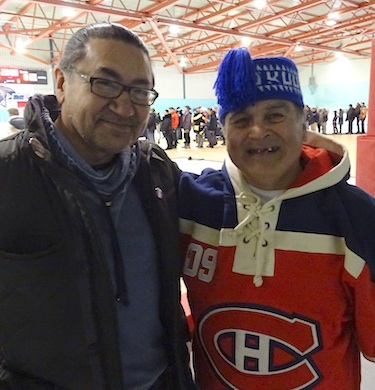 Nunavik MP Romeo Saganash meets constituent Sandy Gordon as they come to see the Stanley Cup on its brief stop in Kuujjuaq. (PHOTO BY JANE GEORGE)

A rookie when elected in May 2011 with 45 per cent of the riding’s vote, Saganash said he’ll no longer be considered a rookie in 2015.

And, if re-elected, he said he’ll bring his experience as an MP back to the region.

On a mission to continue listening and learning from his constituents in Nunavik, Saganash visited Kuujjuaq last week.

While there, Saganash attended Makivik Corp.’s annual general meeting and managed to squeeze in a short visit with the Stanley Cup on its first visit to Nunavik.

His message to the Makivik delegates included an update on the NDP’s call for a detailed review of all northern programs, including Nutrition North Canada.

The Auditor General of Canad’s November 2014 report on the flaws of the unpopular program didn’t go far enough, Saganash said during a brief interview on the ice of the Kuujjuaq Forum, where the Stanley Cup was on display.

Saganash also spoke to the Makivik delegates about his private member’s bill, which would require the federal government to adapt its laws to the United Nations Declaration on the Rights of Indigenous Peoples.

Saganash has said he hopes its implementation will bring reconciliation and equivalent rights to Aboriginal people under the Canadian constitution.

During his presentation to the AGM, delegates also raised concerns about the lack of social housing, maintaining their language and culture, and social issues.

These are issues that Saganash said he can relate to first-hand — because these are also important among the Cree of the James Bay region.

Deeply involved as a lawyer with the Grand Council of the Crees in the implementation of the James Bay and Northern Quebec Agreement, Saganash said this past experience also helped him a better understanding of some of the political issues facing Inuit in Nunavik.

“I’m asking [in the House of Commons] about many of these issues in the North, but it’s good to hear it from them and get reminders,” Saganash said of the exchange during the AGM.

And Saganash said when he stands up to speak in the House, he can see the faces of his constituents and remember what they told him.

To meet more of his constituents, Saganash plans to visit Salluit, Quaqtaq and Kangirsuk next month.