Nunavik Nickel mine sticks to 2012 start-up 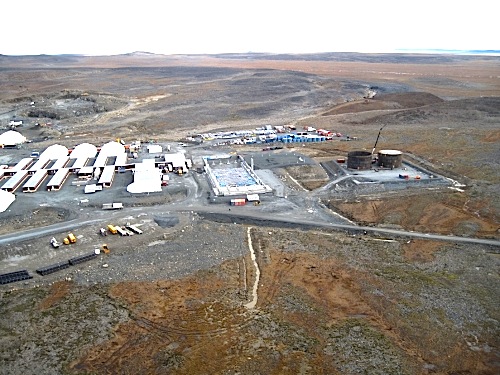 Nunavik Nickel still plans to start operation in late 2012. That’s despite a delay in the construction of the mine’s port facilities at nearby Deception Bay. (PHOTO COURTESY OF GOLDBROOK VENTURES)

Nunavik’s second nickel mine says its plans to be in operation by 2012 remain unchanged.

That’s despite an unforeseen delay in the construction of the mine’s port and docking facilities along the Hudson Strait.

Canadian Royalties had to reconsider its plans last July when the port it started constructing along the shoreline at Deception Bay hit a layer of clay.

“We had trouble with the location because it wasn’t stable,” said Gail Amyot, an environmental engineer with Canadian Royalties. “It would have been dangerous to continue building there.”

Crews were only in the early preparation stages when the project was halted, she said.

Now, Canadian Royalties has secured a new building site roughly 800 metres downstream, south of the original site, where they plan to begin construction on a new port next June.

To do that, the company will have to ask the Quebec government to modify a permit and re-apply for a federal permit, which allows Canadian Royalties to dump 35,000 cubic metres of dredged material offshore in preparation for construction.

But the Nunavik Nickel mine, located 20 kilometres south of Xstrata’s Raglan nickel mine, still hopes to be in operation by the end of 2012, Amyot said.

“If the mill starts production at the end of 2012, there’s no problem,” Amyot said. “There won’t be much concentrate coming out during the winter of 2013, and [the port] should be ready by the shipping season of 2013.”

The mine site also has storage capacity for five-six months worth of production, she said.

This past summer, crews completed the frame of the mill, and equipment will be put in over the winter months.

Pre-stripping of the pit, where the nickel ore will be extracted, has begun. Rock removed from this pit will be used to dam the mine’s tailings pond.

Construction teams have also completed a road to link the site with nearby Xstrata’s mine site, so Nunavik Nickel mine can share the Donaldson airstrip facilities there.

Work during the summer 2011 season employed about 400 workers.

Once the mine starts operation, Nunavik Nickel expects to employ about 500 workers, who will fill roughly 250 positions on alternating shifts.

To maintain contact with the communities closest to the mine, Kangiqsujauq, Salluit and Puvirnituq, Canadian Royalties officials will sit on a “Nunavik Nickel committee,” with representatives from landholding corporations of those three communities and a representative from Makivik Corp..

It’s uncertain how the strained relationship between Goldbrook Ventures and Jilin Jien Nickel Industry Co., Ltd., the majority owner of Nunavik Nickel, will impact the project.

That took another turn Nov. 30 when Goldbrook advised its shareholders not to accept a buy-out from the Chinese company.

Goldbrook refused the offer of $0.30 per share from Jilin Jien to Goldbrook shareholders to acquire all of the issued and outstanding shares of Goldbrook, which holds 25 per cent of the mine project.