Nunavik: On your mark, get set, vote 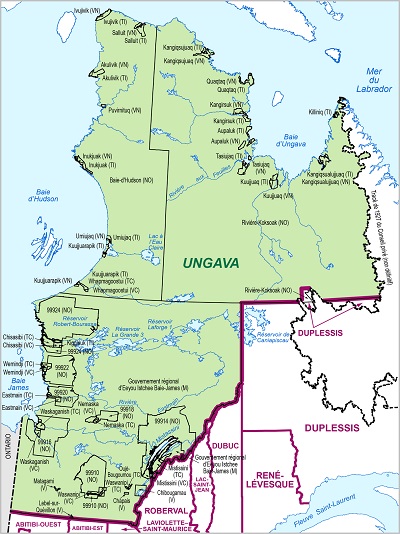 Nunavimmiut go to the polls Oct. 1 to vote in Quebec’s general election. Nunavik makes up about a third of Quebec’s largest and northernmost riding, Ungava. (IMAGE COURTESY OF ELECTIONS QUEBEC)

If you live in Nunavik or elsewhere in Quebec, it’s your last weekend to decide how to vote in Monday’s election.

Quebecers go to the polls on Oct. 1.

In Ungava, incumbent Liberal MNA Jean Boucher is running for re-election, after first winning the riding in 2014.

Boucher said his government has delivered a number of major investments to the region over its mandate, including new health care facilities, schools and telecommunications infrastructure. But he acknowledges the region has many more needs.

Denis Lamothe, a former Sûrete du Québec officer who worked in both Kuujjuaq and Kuujjuaraapik, is running to represent Coalition Avenir Québec in Ungava. He was one of the few candidates who campaigned in the region.

Chibougamau-based archeologist and SAQ manager Jonathan Mattson is running for the Parti Québécois and promises nation-to-nation dialogue with Inuit, if elected.

Tukkiapik said the QS has voiced the clearest support for Indigenous groups in the province.

Makivik Corp. also did its own interviews with Ungava candidates; the Inuktitut version of those interviews is posted on their website.

Other candidates running in Ungava:

• Cristina Roos for the Green Party of Québec

In Kuujjuaq, voters can cast ballots at the Northern Village office. In the region’s other communities, voters can check in at their local NV office.

Voters should bring a piece of identification with them to vote on Monday.

As of Sept. 27, CBC’s poll tracker has the Coalition Avenir Québec with 30.9 per cent support and a razor-thin lead over the Liberals, who sit at 29.9 per cent.

The Parti Québécois sits at 19.8 per cent and Québec Solidaire at 15.8 per cent.

For more information on the Oct. 1 election, visit www.electionsquebec.qc.ca.