Makivik, FCNQ team up to give Nunavik Inuit power control over renewable energy 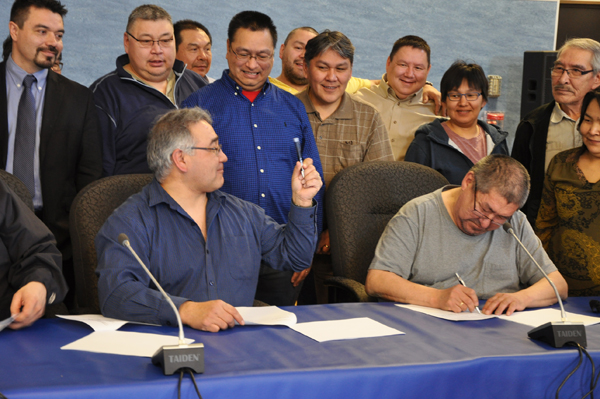 Makivik Corp. and the Fédération des Coopératives du Nouveau-Québec, or the FCNQ, announced what they call a “historic” agreement between the two organizations in Ivujivik Feb. 21, as they signed an agreement to launch PowerCo.

The company, which will eventually get an Inuktitut name, will create renewable energy projects in Nunavik.

Its creation flows from the Government of Quebec’s goal of reducing the use of fossil fuels by 40 per cent by 2030, said Makivik president Jobie Tukkiapik in Ivujivik.

“We have to be in the game,” Tukkiapik said. “And it will be good to speak with one voice in green initiatives.”

As part of Quebec’s efforts, Hydro-Québec has launched a new program for organizations wanting to produce wind, solar and potentially tidal energy, which the provincial power corporation would purchase and sell to customers.

Though renewable energy development has yet to take hold in the region, the new 100 per cent Inuit-owned joint-venture is a natural fit for both Makivik and the FCNQ, which already own construction, transportation and fuel subsidiaries.

The FCNQ currently supplies all diesel fuel to Hydro-Quebec in Nunavik—more than 50-million litres of diesel and other fuels each year to power homes and transportation.

PowerCo still has legwork to do to identify which sources of power to focus on and where.

Wind is the most advanced renewable technology—and PowerCo will have at least one project to look to: the three-megawatt wind turbine in operation at the region’s Raglan nickel mine.

The joint-venture has an agreement with Glencore, the mine’s owner, to collect statistical data on the project.

PowerCo said it hopes to collaborate with the region’s mining industry, although the bulk of its projects will focus on category 1 or 2 lands, with the goal of powering local communities.

Those projects would be jointly developed through a local corporation, Makivik explained, in which the landholding corporation and the local co-op would be invited to join as stakeholders.

Makivik and the FCNQ said there could be interest in partnering with a local project in progress—the small-scale Innavik hydroelectric project in on the Inukjuak River.

Owned 50-50 by Inukjuak’s Pituvik Landholding Corp. and Innergex of Longueuil, Que., the project could generate 7.5 megawatts for power, enough to provide electricity to the community of 1,700.

But Nunavik officials said this week that the project is still waiting for funding to move forward.

FCNQ President Aliva Tulugak sees PowerCo as a chance to potentially revive a hydro-electric project outside his home community of Puvirnituq, which was studied in the 1990s.

“When we started negotiating with Hydro-Québec, the costs were too high. It was still less expensive to produce energy with diesel power,” Tulugak said. “This is a new chapter.”

While the thrust of the project might be economic development and green energy, Tulugak says PowerCo will eventually help lower the cost of living in Nunavik.

When Quebec first launched its Plan Nord in 2011, the province pledged support for a number of renewable energy projects in the region.

In recent years, Hydro-Québec has studied at least two potential projects in Nunavik: wind power in Kangiqsualujjuaq and an underwater generator near Kuujjuaq, but neither project was considered profitable or pursued.

It’s too soon to know what sort of support PowerCo could count on from Quebec now, but the new joint-venture expects it will see some funding from the province. Both Makivik and the FCNQ have committed start-up capital.

PowerCo still has to seek out the expertise the company will need to navigate the renewable energy industry.

Within a year, the joint-venture will appoint eight directors—three from each of the two organizations and two industry experts.

But Tukkiapik stressed the company’s Inuit leadership and vision.

“We want the Inuit of Nunavik to have control of those projects,” he said.