“We need to be able to protect ourselves, but others as well” 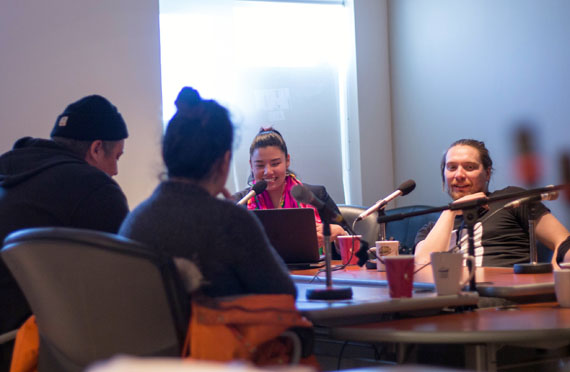 A group of Nunavimmiut youth sit around a table chatting about one of the region’s biggest taboos—sex and sexual health.

Kuujjuaq youth leader Olivia Ikey recalls making an appointment to see a sexual health nurse at the community’s health centre and compares the experience of waiting to see the nurse as being the “gorilla in the room.”

“You’re sitting in that hallway and every frickin’ person who walks by you knows what you’re doing there,” she said.

But Ikey also recognizes that getting tested for sexually transmitted diseases should be automatic and done without shame or reservation—especially in a region where syphilis, chlamydia, gonorrhea and to a lesser extent, HIV, are on the rise.

Just talking about sex helps break the barrier, and that’s the whole point. The Nunavik youth are taking part in a new podcast produced by the Nunavik Regional Board of Health and Social Services’ Check Up Project.

Piusivut, which roughly translates as “our traits,” launched in February—the first of eight podcasts made available online.

“We wanted to keep it open—not just about sexual health—so we can be relatable,” said Louisa Yeates, Piusivut’s host and coordinator. “It’s to claim our traits as Inuit.”

Traits can be physical, she said, but the show also delves into issues like Inuit culture and history, online safety and psychological trauma.

Another episode titled Happy Hour explores alcohol use, partying and risky behaviour, where the show’s guests speak openly in both English and Inuktitut about the morning after regret that come with “waking up naked.”

“It happens to the best of us, and to the worst of us,” Yeates said.

Sexual health isn’t just about having sex and getting checked for sexually transmitted infections, of course, she pointed out.

Yeates has also brought in a number of well-known Inuit artists and First Nations spokespeople to share their own experience.

In one of Piusivut’s most recent episodes, Anishinaabe comedian Ryan McMahon visited Kuujjuaq to talk about decolonization and breaking negative cycles.

Part of that same episode touched on how children come to learn about sex.

“It often starts when they ask: Mommy, where do babies come from?” Yeates said. “How do we speak about it?

“We need to be able to protect ourselves, but others as well.”

Learn more about Piusivut through the Check Up Project’s Facebook page.

You can listen to Piusivut on Soundcloud, or by subscribing to the podcast on iTunes or Google Play.