“We’re doing the best with what we have” 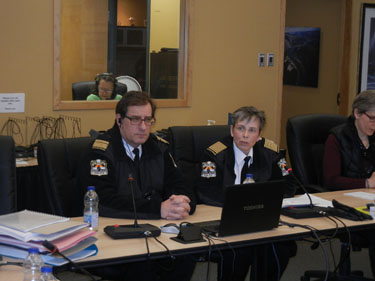 The SQ used to police Nunavik, along with community police, before the Kativik Regional Police Force formed in 1995 — and then again for several months in 2006 and 2007, when it turned out that only six of the KRPF’s 54 officers and special constables had all their paperwork in order and had been legally sworn in as police officers.

Owpaluk said shortage of Inuttitut-speaking police officers now on the force makes it particularly hard for unilingual elders to get help from police.

Other councillors complained about low numbers of Inuit officers and the young age of many recruits during discussions about the KRPF, which was started in 1995 as an aboriginal police force.

There were also complaints about police brutality and other incidents.

One recent incident — only referred to only as an “unfortunate” event in passing by police chief Aileen MacKinnon, concerns a man in his 50s who was stabbed repeatedly inside a Puvirnituq jail cell during the early hours of Feb. 22 by another man sharing his cell.

But MacKinnon was prepared for the councillors’ criticism: she came armed with “comfort bears” for all the councillors — stuffed teddy bears dressed in tiny black KRPF t-shirts, like the ones that will be given to kids who end up in police care; a trilingual kit on how to make complaints about police; and Pierre Bettzes, her new deputy chief of administration, civil security and support, who will look after issues connected to police discipline.

MacKinnon admitted “we’re not perfect,” acknowledging that four of the current force’s 69 officers are on disciplinary leave, with two facing criminal charges.

But she said “we’re doing the best with what we have.”

That’s what $18 million a year can provide, MacKinnon said. This means two officers in each of the smaller Nunavik communities and more in the larger ones.

The KRPF also does what “other forces do not do,” Mackinnon said. That includes escorting prisoners and often guarding them.

And if people in Nunavik think that the SQ would be better, MacKinnon said they likely are wrong: SQ members would receive better benefits, live in better houses and be paid more.

That would cost Quebec about $60 million a year — but the SQ could decide to hire many of the KRPF officers who already live in the communities. In other words, nothing might be different, except for the cost.

As solutions to the criticism from councillors, MacKinnon said the KRG, which oversees the police force, hopes to negotiate a new agreement with the provincial and federal governments that will give the KRPF more money — that would go for better trucks and more staff including an Inuit liaison officer who would, in the absence of Inuit officers, provide a liaison with communities and try to recruit more Inuit willing to work on the force.

And, in the future, a 911-dispatch service, featuring Inuttitut speakers, possibly located in southern Quebec, may provide Inuttitut service to callers, she said.

That hinges of the success of the negotiations for the renewal of funding for the KRPF, which ends March 31.

KRG chairperson Maggie Emudluk also sprang to the defence of the KRPF. She said the police can’t be held responsible for solving all problems in the region.

While acknowledging that more money won’t solve those problems either, Emudluk said the KRG still wants more money so it can do its job with the proper resources— if not, the KRG may suggest the region can do without a police force.

Considering the statistics on crime as well as alcohol and drug seizures in the region, which were tabled at the meeting, this looks unrealistic.

• many communities with more criminal incidents than residents — such as Ivujivik, with population 370 in 2011, and 793 criminal offences; and,

• seizures of alcohol with a street value of $413,920, drugs including 413 kilos of marijuana, cocaine, mushrooms, ecstasy, hashish and 550 vials of hash for a total street value of $2.5 million.