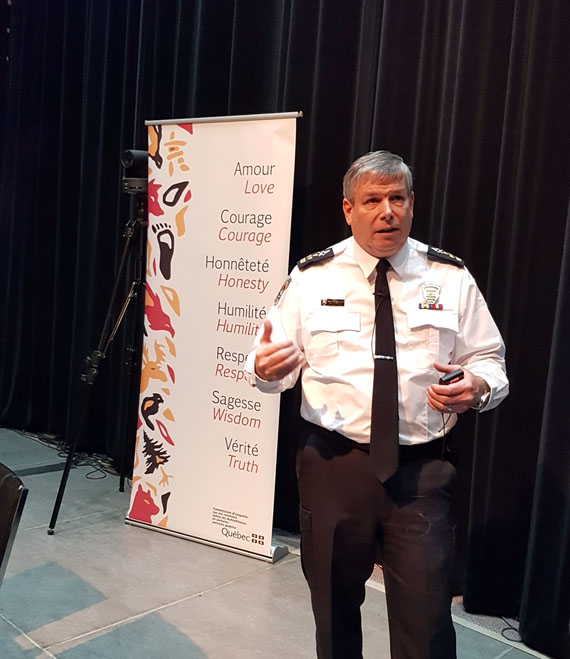 “If we don’t get an agreement by the end of the year, I will have to ask the SQ to take over public security in Nunavik,” Larose told Viens commission hearings Nov. 22. “It’s that severe at this point.” (PHOTO BY SARAH ROGERS)

KUUJJUAQ—Nunavik’s Kativik Regional Police Force is threatening to turn policing over to the Sûreté du Québec if the federal and provincial governments don’t soon finalize its funding agreement, which expired last April.

KRPF chief Jean-Pierre Larose told Quebec’s Viens commission on Thursday, Nov. 22, that the force is out of funding and essentially “on life support.”

Policing in Nunavik receives 52 per cent of its funding from the federal government and 48 per cent through the province.

“They’re all agreeing with what the plan is,” Larose said of ongoing negotiations. “But the question is, how do we fund it?

“If we don’t get an agreement by the end of the year, I will have to ask the SQ to take over public security in Nunavik. It’s that severe at this point.”

Just before the previous tripartite agreement expired in April, Justice Jacques Viens—who is chairing the commission—called on both governments to work to resolve the policing agreement.

That resulted in an $8-million advance contribution from Quebec, but that money has been spent, Larose said.

“We continue to pay our employees and maintain our services through [Kativik Regional Government] financing,” he told the commission. “But there’s no more money.”

Larose said he’s had informal discussions with SQ management about the possibility of bringing in the force, but he wouldn’t expand on the logistics of doing so or what it could mean for KRPF staff in place.

The KRPF was created in 1995 to replace the SQ’s services in the region.

The provincial force has been brought back in to maintain policing services at least once, over a six-week period in 2006, when then-KRPF chief Brian Jones was fired and staffing levels were critically low.

The tripartite agreement negotiations hinge on the request for additional funding the KRPF has made, Larose said.

That money is needed, in part, to hire additional officers to relieve the demands on existing staff.

Nunavik communities, depending on their population size, are staffed with between three and five officers, who often work patrol shifts alone and are almost always on call.

Testimony made to the commission the day before made that point clear, when a former KRPF sergeant told the hearings on Wednesday, Nov. 21, about his first weeks as a constable on the job.

Jean-Mathieu Lafleur said when he arrived in Puvirnituq in April 2002, he started his first patrol that same evening, with no induction and no uniform.

“We just take these officers from the south to the North without really explaining to them the social context,” he said.

Within the first few months of the job, Lafleur described being called to respond to a violent altercation in which he had to take a fellow constable into custody.

He testified he was asked by a supervisor to cover up the incident. He later opted to file the police report with relevant information, but said it created tension in the work place.

On his first gun call, Lafleur and his partner—as constables, both were unarmed—responded to an active shooter firing shots throughout the village and, later, directly at him.

It took 13 hours for the KRPF to bring in backup from Kuujjuaraapik.

Gun calls were and continue to be common, he said, and he and his colleagues had to devise their own methods to create perimeters around active shooters.

“People were shooting to kill you,” Lafleur told the hearings. “There was no way to negotiate.”

Lafleur has been on medical leave from the force now since 2016.

He told the commission that new recruits to Nunavik need a solid introductory period before they start patrol work, with cultural awareness training, and increased rest time.

Lafleur said he was fortunate to befriend an Inuk teacher in Puvirnituq, who invited him to take part in traditional activities and show him that “beautiful things were happening, too.”

KRPF sees a turnover of 70 staff a year

Larose responded to Lafleur’s testimony, acknowledging that many new recruits “are not ready” for the demands of the job.

That’s in part because the majority of KRPF officers have less than a year of policing experience before they move to Nunavik.

Only three of KRPF’s staff of 68 are Inuit, and its overall turnover is around 70 staff each year, with many officers leaving after a few months, though some have been on the force for years.

“The importance of having an introductory period is fundamental,” Larose told the hearing.

“We’re aiming to have that. New hires go through Kuujjuaq and they get at least one week of training.”

But Larose said the work is demanding, regardless.

“I have seen events here that I’ve never seen in my career before. It’s colossal,” he said.

“The volume here is incredible.”