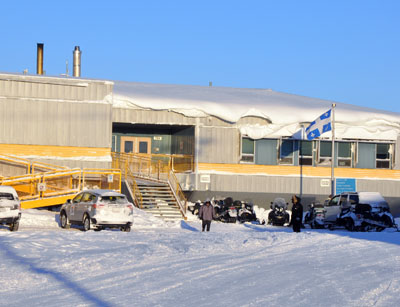 Nunavik’s public health department is asking community members in Puvirnituq to check in with the Inuulitsivik health centre if they’ve been in close contact with people diagnosed with TB or if they present symptoms of the infection. (PHOTO BY SARAH ROGERS)

Health officials are hoping to stem an outbreak of tuberculosis in the Nunavik community of Puvirnituq.

The Hudson coast community of about 1,800 has seen eight active cases of the infectious disease since September.

But while Puvirnituq experienced larger TB outbreaks in the mid-1990s and mid-2000s, eight is the most cases which the community has seen in a year since 2009.

Rochette said many of those infected with TB in Puvirnituq are members of the same family.

“But we’re still investigating those cases and their contacts,” she said. “The health centre is working to identify and screen people who’ve been in contact with those who are infected.”

Public health hosted a public meeting in the community last week to promote TB prevention and to encourage community members to visit the local Inuulitsivik health centre if they present any symptoms.

Symptoms of TB can include:

• a persistent cough that lasts for two weeks or more

• loss of appetite and weight loss

• pain in the chest when breathing

TB can pose a serious health threat if it remains undiagnosed and untreated, particularly among children and seniors. The infection usually affects the lungs.

But while TB is a serious disease, the bacterial infection is not so easily transmitted, Rochette said, noting there is a very low risk of contracting the disease at large social events, like feasts or hockey games.

But a person who spends several hours with someone who is sick with TB in a closed space, like a home, can become infected.

“So we’re not asking people to avoid holiday parties, but just to ensure good air ventilation wherever they are,” she said.

Inuulitsivik will host screening clinics through the holiday period, Rochette said, while the department will launch a wider prevention campaign in the new year.

Across Nunavik’s 14 communities, the public health department has tracked about 35 cases of TB throughout 2017.

That’s slightly lower than in recent years; in both 2016 and 2015, Nunavik saw 41 active cases of the infection.