“Quest is poised to ultimately meet that demand”

It’s one of the few commodities in demand among global metal markets — and Nunavik could see its first rare earth mine go into production as early as 2019.

Montreal-based Quest Rare Minerals Ltd. has proposed a project that would mine more than 350,000 tonnes of rare earth concentrate each year over a 30-year period from its Strange Lake property at the southeast corner of Nunavik, along the Labrador border.

The project is still in a preliminary phase; the company is preparing a feasibility study this year, with plans to submit an environmental impact statement in mid-April 2016.

“Market demand for non-Chinese supply of these critical industrial materials continues to grow and Quest is poised to ultimately meet that demand,” said Quest Mineral’s president and CEO Peter Cashin in a release last year, following the assessment.

While low metal prices have kept much other mining activity in Nunavik at bay this year, rare earth elements have been in strong demand, used in everything from magnets, car brakes, iPhones and other electronics.

Despite their name, they actually are quite plentiful on earth but hazardous to extract.

The consumption of rare earth elements is expected to increase by anywhere from 700 to 2,600 per cent over the next 25 years.

In a project summary prepared for the provincial and federal governments, Quest Rare Minerals said its Strange Lake project, located roughly 325 kilometres southeast of Kuujjuaq, would involve the annual production of 357,600 tonnes of rare earth concentrate from 2019 to 2049.

The elements, mined from a single open pit, would be crushed and trucked to the Labrador coast, where the product would be shipped south and along to the St. Lawrence River to a processing plant in Bécancour, Quebec.

The report noted seven possible locations for an airstrip, all within a 10 km radius of the mine site.

Once in operation, Strange Lake could employ up to 689 employees, although only 300 of them would work out of the Nunavik mine site; the rest would be employed in the southern Quebec processing plant.

Quest Rare Minerals has held a number of meetings with regional bodies, like Makivik Corp. and the Kativik Regional Government.

The report noted concerns raised by Nunavik groups about caribou migration through the region, and the project’s impact on local Arctic char populations.

Quest has more than 500 mineral claims across a 23,000 hectare exploration field in Nunavik, all of which falls on Category III lands.

Strange Lake is one of only two rare earth mining projects in the region, but much more advanced: Commence Resources Corp. prepared a preliminary economic assessment on its Ashram property, just north of Strange Lake, in 2012, but has reported little on the project since. 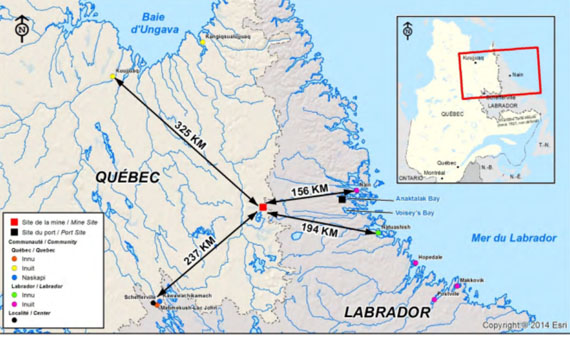 This map shows the Strange Lake mine project site in proximity to Kuujjuaq, 325 kilometres northwest, and to the Labrador coast, about 150 kilometres east. (IMAGE COURTESY OF QUEST RARE MINERALS)