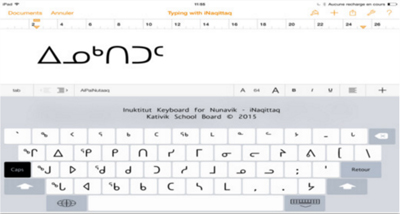 The new iNaqittaq keyboard allows Inuit users to type in Nunavik syllabary on iPads, iPhones, and iPods. (IMAGE COURTESY OF THE KSB)

Nunavik’s Kativik School Board has launched new Inuktitut keyboard software for iOS devices, hoping it will encourage the use of the Inuit language at home and at school.

The KSB’s iNaqittaq keyboard uses the Nunavik syllabary and is now available to be downloaded for free from the Apple App store, the school board said Nov. 23.

Once the software is installed on iPads, iPhones, and iPods compatible with iOS 8, the new keyboard will let users choose an Inuktitut syllabic keyboard instead of English or French keyboard layouts.

And while the keyboard was developed by the school board, the new tool falls in line with the KSB’s recent campaign to encourage Nunavimmiut to speak Inuktitut at home.

“The Inuktitut language is in constant competition with English, which is the most commonly used language on the Internet and on electronic devices such as iPads, iPods and iPhones,” said Rita Novalinga, the KSB’s assistant director, in a Nov. 23 release.

The KSB says it’s noted an increase in students coming into the system unable to speak Inuktitut, which prompted its language campaign.

The school board has also acknowledged that Nunavimmiut youth are increasingly using social media to communicate with friends and family.

But much of that communications is happening in English, or a mix of the two languages, the KSB said, which has an impact on the structure of the Inuktut language.

Nunavik’s Parnasimautik consultations and the blueprint that came from identified the preservation and promotion of the Inuit language as a major priority.

A drawing recognition application for syllabics is also being developed and should be available later during the school year, the KSB said.