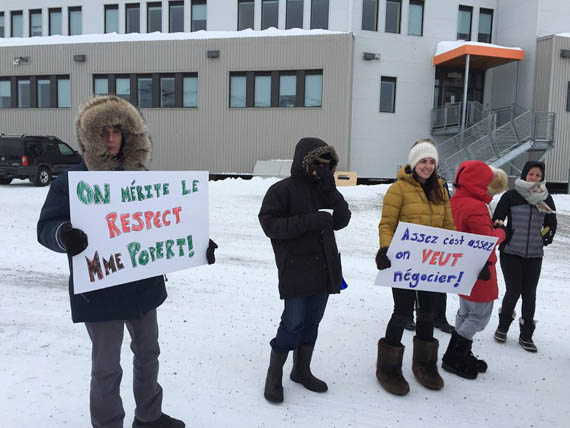 Teachers and staff demonstrate outside of Nuvviti school in Ivujivik. The sign says: “We deserve respect, Madame Popert,” referring to the KSB’s director general Annie Popert. (PHOTO COURTESY OF AENQ) 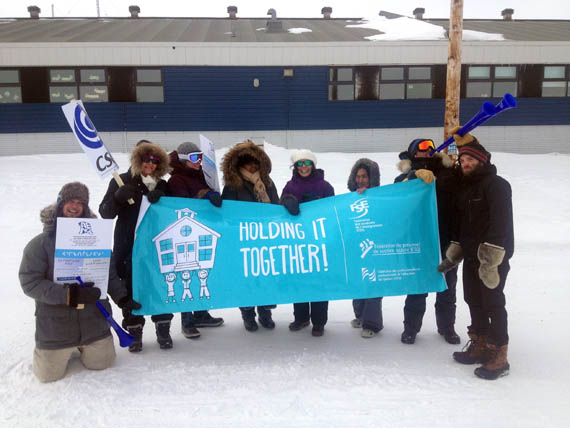 Quaqtaq teachers, professionals and support staff demonstrate outside the community’s Isummasaqvik school April 26. They’re asking the KSB to table its demands so their union can finalize their contract negotiations after two years of talks. (PHOTO COURTESY OF AENQ)

Six months after the Quebec labour board ordered Nunavik’s school board back into negotiations with its unionized teachers and support staff, the union representing them says there’s been little progress.

Nunavik teachers, school professionals and support staff have been without a contract for two years.

When negotiations stalled through 2015 and 2016, the Association of Employees of Northern Quebec filed a complaint with Quebec’s labour board last year, which ordered the Kativik School Board to file its proposals.

Although the two parties came back to the table in January 2017, union president Larry Imbeault said many of the employer’s demands remain unknown—the KSB now has a May 15 deadline to table those demands.

But the AENQ hopes the KSB might move even sooner.

Teachers and support staff demonstrated outside Nunavik schools and offices April 26 to show frustration with the process, carrying signs that said “Holding it together!”

“We still have no trust in the board,” Imbeault said. “We hope that the demonstrations that are taking place during lunch time today will show to the board that we are tired of waiting.”

Imbeault said the union is planning further action if the KSB doesn’t respond to its latest deadline.

In a statement emailed to Nunatsiaq News, the KSB said it has taken part in the bargaining process since January, including sessions agreed on by both parties scheduled all this week in Montreal.

For its part, the KSB has been in talks with Quebec’s education department. Last December, the KSB said it has also demanded benefits for Inuit employees be included in the offers.

The school board wants to be able to negotiate working conditions for its teachers, professionals and support staff by itself, as noted in the James Bay and Northern Quebec Agreement, although Quebec has always handled those negotiations.

The union argues that those efforts have sidetracked negotiations; instead, Imbeault said that teachers and support staff received a $500 lump sum as compensation for no salary increase in 2015-2016.

As part of contract negotiations, Nunavik teachers and support staff asked for a 4.5 per cent salary increase a year over a three-year period, which has been agreed on, but won’t be implemented until the agreement is signed.

The union is also asking for increased support for special needs students in KSB schools, a complementary pension plan to adapt to the high cost of living in Nunavik and the acknowledgement of National Aboriginal Day as a holiday, among other demands.

For its part, Quebec has asked for higher teacher-student ratios, changes to parental leave and cuts to employee pension plans.

The roughly 400 teachers and 350 support staff in Nunavik are the only groups in the province still waiting to negotiate collective agreements.

Additional negotiation dates have also been scheduled for May and June, the KSB said.