Nunavik to develop, negotiate its own youth protection services 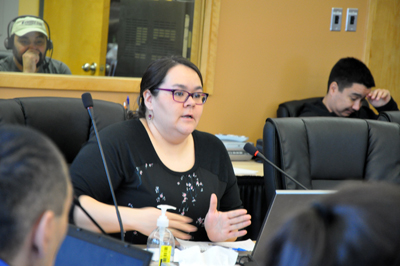 Mina Beaulne is advisor to Nunavik’s integrated services for youth and families at the Nunavik Regional Board of Health and Social Service, which will oversee the process. (PHOTO BY SARAH ROGERS)

KUUJJUAQ—The Kativik Regional Government has pledged its support to an effort to revise Nunavik’s youth protection services, with the goal of better adapting those services to Inuit communities.

Youth protection has long been a sore spot in the region, where last year more than 2,000 Nunavik children were signalled to authorities, which indicates a child may be in danger.

Of that group, 374 children were placed in foster care. While youth protection makes efforts to place Nunavimmiut children with other Inuit families, a shortage means some children are sent to live with families in Montreal.

The Quebec government passed a new version of its youth protection act last year. That marks an opportunity for Nunavik to negotiate changes to section 37.5 of the act, which allows the province to enter into agreements with Indigenous communities to design and manage their own youth protection programs.

Mina Beaulne is the advisor to Nunavik’s integrated services for youth and families at the Nunavik Regional Board of Health and Social Service, which will oversee the process.

She said the aim of Quebec’s legislation is both necessary and valuable.

“We all want our children to be protected,” she said during a presentation to KRG council in Kuujjuaq on Tuesday, Nov. 28. “But [the application of the law] isn’t really appropriate to our way of life.”

That had been flagged a decade ago in an investigation by Quebec’s human rights commission, which called on Nunavik communities to take action for the well-being of its children.

“They acknowledge that the application of the youth protection act was not well adapted to the reality of Nunavik,” Beaulne said.

The development of a special youth protection program is conditional on the support of Nunavik’s major organizations, Beaulne explained.

To do that, an Inuit working committee will host public consultations and draft recommendations on what the program should look like.

Beaulne pointed to the success of other First Nations in Quebec who’ve worked to develop their own programs.

The Atikamekw, a First Nation north of Montreal, have developed a plan that relies on family and community collaboration through the intervention process, rather than a legal approach, and all intervention is carried out in the Atikamekw language.

Since the nation has implemented the plan, Beaulne said the number of youth protection cases referred to the court has dropped from 80 per cent to 20 per cent.

But Nunavik also has an Inuit-focused model to look to.

The Qarmaapik family house in Kangiqsualujjuaq took home a $700,000 Arctic Inspiration Prize last year to build on a locally run safe house for families in crisis.

The house is staffed by a team of community health and social service providers, elders and educators who wanted to address the depression, addiction, post-traumatic stress and even incarceration that has prevented some parents from meeting their children’s needs.

“As a community we wanted to take things into our own hands,” said Kangiqsualujjuaq mayor Hilda Snowball.

Last March, Qamaarpik house reached an agreement with local health services to have its staff present during youth protection interventions.

Qamaarpik has been involved in 21 interventions since then, Snowball said.

She says there can still be resistance on the part of social service workers, but Snowball has asked the health centre to explain Qarmaapik’s role to staff who are new to the community.

“So I’m pushing us all to work together on this,” she said.

The new Inuit working group is set to meet for the first time on Dec. 11 to draft its mandate.