“We want a clear understanding” 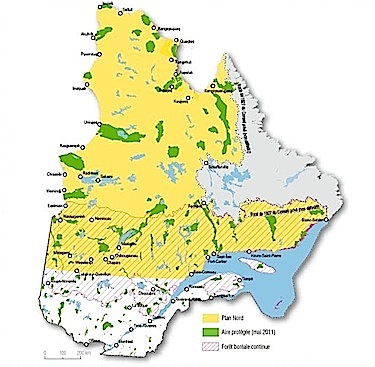 This Plan Nord map shows the entire area of northern Quebec in yellow, with the proposed protected areas shown in green. Kuujjuaq has a community greenhouse, shown here last summer when it was undergoing some roof repairs. Last week Quebec announced $800,000 for greenhouse development in northern Quebec, but that money won’t end up in Nunavik, where it wouldn’t be covering the construction cost of even a single new greenhouse. The money is likely to go to the so called “Jamesians,” non-native Québécois living in the southern portions of the traditional Cree territory. Meanwhile, the Kativik Regional Government has plans to look at making Kuujjuaq’s greenhouse into a commercial greenhouse, but using money not attached to Plan Nord to push that project ahead. (FILE PHOTO)

KUUJJUAQ — In Nunavik, you don’t have to look hard to see Inuit feel left out of Plan Nord’s loop.

That unease with respect to Plan Nord surfaced at the recent meeting on self-rule in Kuujjuaq, where delegates at the meeting backed away from supporting Premier Jean Charest’s grand development scheme for northern Quebec — unless it proceeds with the approval of Inuit in Nunavik.

The lack of enthusiasm cropped up again at this week’s meeting of the Kativik Regional Government in Kuujjuaq, where some said Nunavimmiut don’t really understand Plan Nord’s goals, which don’t appear to include them.

Earlier this week, Charest was in Toronto where he said that Plan Nord would help protect Canadian sovereignty in the Arctic.

“It is important to act sooner and to occupy the territory … and in a good way,” he said.

But many Inuit in Nunavik communities haven’t had the same chance to hear first-hand why they should embrace Plan Nord.

Some of the communication from Quebec about Plan Nord hasn’t been “understandable,” while the debate around Plan Nord in southern Quebec comes to them second-hand through the media, councillors complained.

“The people we are representing don’t have updated news,” Joseph Annahatak, the vice-chairperson of the Kativik Regional Government, told KRG councillors meeting Nov. 29 in Kuujjuaq. “We want a clear understanding.”

To date, many of the “Plan Nord” projects, such the recent announcements about new tourism development or the creation of the a fourth provincial park, weren’t new commitments of money at all, those at the KRG meeting pointed out.

Last week, Pierre Corbeil, the Quebec minister responsible for northern Quebec, made yet another announcement related to Plan Nord: that there would be $800,000 available through Plan Nord for greenhouse development in northern Quebec and $50,000 for the creation of an organic food “bio-food” research network in the region.

“The immensity, the diversity and the wealth of the North make it a unique place, a land of opportunity for our generation and for generations to come,” Corbeil said Nov. 23 in Quebec City.

But you don’t hear that level of gushy promotion from people directly affected by Plan Nord in Nunavik.

Johnny Akpahatak, the regional councillor for Aupaluk, told the KRG meeting that Plan Nord and its development is already at his doorstep, as consultants and staff working for Oceanic Iron Ore Corp., which wants to see a huge iron mine outside his village of 150, arrive by the planeload.

“It’s going to be hard to fight for our land,” Akpahatak said.

That’s because Plan Nord and the development it wants to bring to the North has already arrived and seems like a done deal to him.

Akpahatak said the interest in developing the iron deposit near Aupaluk makes him remember the Inuit, who toiled for a couple of dollars a day “almost like slaves” in the past to help exploration companies, which will now become rich off their resources.

Others at the KRG meeting bemoaned the 1975 signing of the James Bay and Northern Quebec Agreement, which extinguished their traditional rights — and power — over their lands.

Then, in 2002, their leaders signed the Sanarrutik agreement, which paved the way for “partnership” in a new wave of development in Nunavik. This agreement called, among other things, for the provincial government to pay out more than $360 million in tax-free transfers to Nunavik Inuit over 25 years, pave the region’s roads and set up a provincial park network there in exchange for possible “partnership” on future hydroelectric projects and mines.

Louis Mercier, the KRG’s political attaché in Quebec City, suggested that this 2002 deal could be a “tool” for development.

But several councillors said they worried about what Nunavik will look like when its land is developed or if a hydroelectic power project on the char-rich Payne River becomes reality.

Maggie Emudluk, chairperson of the KRG, said her organization only signed a working document on Plan Nord last May, “a declaration of understanding,” not any binding agreement to support Plan Nord.

But it could be hard for the KRG to reject Plan Nord, she admitted, due to the KRG’s status as a regional municipal organization, whose budget — about $300 million — mainly comes from Quebec.

At Makivik Corp.’s Annual General Meeting this March, Nunavimmiut will be able to say whether or not they support Plan Nord, she said.

But Emudluk cautioned that if Nunavik didn’t participate in Plan Nord, as the Inuu have threatened, the development would still continue.

Emudluk promised to promote Nunavik’s Plan Nunavik — which spelled out what the region wants to see by 2035 — such as a connection to the power grid — and to follow Plan Nord closely.

The KRG also plans to ask Quebec officials to visit communities early in 2012 to talk more about their government’s development and land protection scheme.

Also at the KRG meeting, councillors learned about a new “table Québec Nunavik,” a permanent discussion forum that appears to further entrench the relationship between and Quebec and cement its Plan Nord.

According to a document discussed at the meeting, the forum will “ensure the stengthening of political, economic, social and administrative relations” between Quebec and Nunavik organizations.

This new body will deal with JBNQA implementation and discuss Plan Nunavik and Plan Nord.

The ministers and Nunavik officials will meet once a year, while their deputies are to meet three times a year.

Quebec’s cabinet is expected to approve the creation of this forum before its ministers break for the holidays.