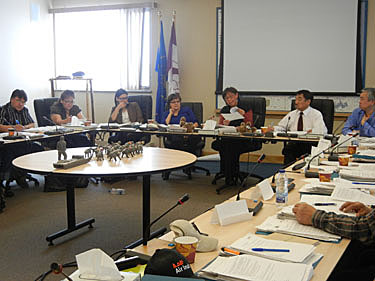 Kativik Regional Government councillors listen as KRG chairperson Maggie Emudluk talks about the measures to offset the high cost of living in the region. (PHOTO BY JANE GEORGE)

KUUJJUAQ —Nunavik will continue to receive at least $5 million next year from Quebec to offset the high cost of living in the region.

That’s what regional councillors heard Feb. 27 at the meeting of the Kativik Regional Government council in Kuujjuaq.

Representatives from the KRG and Makivik Corp., who jointly administer the money, are still lobbying for more money from a long-term agreement.

But a letter to Parti Québécois Premier Pauline Marois about the need to expand the cost-of-living measures has, as yet, gone unanswered, said Maggie Emudluk, chairperson of the KRG.

If there were roads to Nunavik, then a protest to block those roads could be a way of drawing attention to the region’s high cost of living, Emudluk said.

But that isn’t the case

Instead, the KRG will use research to help their case: a new comparative study of the cost of foods in Nunavik when compared to the South will be ready this spring, she said.

A similar study produced in 2011 found food costs up to 93 per cent more in Nunavik than in Quebec City.

The $5 million already earmarked for the region in 2013-14 will provide Nunavimmiut with:

• $750 for every person over 60 who is a beneficiary of the James Bay and Northern Quebec Agreement;

• a subsidy to purchase home appliances and furniture;

• a 20-per-cent reduction on some food items;

• support to Inuit harvesting and traditional activities, such as the purchase of boat motors and other equipment items.

But the 2013-14 measures mean some will tighten their belts a bit — no longer will non-Inuit elders in Nunacik receive a yearly cheque from the program, while those beneficiaries who do qualify for an elders payment will receive $250 more than last year.

And $5 million — the same amount that Nunavik received last year — will no longer cover subsidies on the costly transportation of vehicles such as all-terrain-vehicles to Nunavik.

The first cost-of-living agreement for the region was a three-year deal signed in 2007 for $12 million.