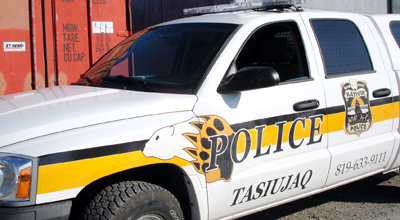 A Nunavik woman has sued the regional police force for gross negligence, three years after she was raped in the back of a police car. (PHOTO BY JANE GEORGE)

A young Nunavik woman is suing the Kativik Regional Police Force for gross negligence, three years after a prisoner raped her in the back of a police car.

On Sept. 19, 2011, the woman, then 17, was visiting friends in Tasiujaq, on Nunavik’s Ungava Bay coast, when she became intoxicated and was picked up by a member of the Kativik Regional Police Force — the only police officer on duty in the community that night.

The female officer handcuffed the girl and put her in the back of the KRPF cruiser, next to another prisoner, Joe Kritik, who she had picked up at a disturbance in another house.

Kritik, then aged 24 and a repeat sex offender with four previous convictions for sexual assault and who was listed on the national sex offender registry, was not wearing handcuffs. He was also on probation for an earlier offence.

The officer was new to policing and new to the community, and wasn’t yet authorized to carry a firearm.

When the officer left the two detainees in the back of the pick-up truck to gather information on her latest arrest, the 17-year-old testified that Kritik pulled down her pants and raped her. Because she was handcuffed and intoxicated, she said she could not defend herself.

The officer was suspended following the incident and resigned from the KRPF soon afterwards.

An internal KRPF investigation later cleared her of any criminal wrongdoing.

But a psychological assessment done in 2014 confirmed the victim, now 21, suffers from post-traumatic stress disorder and as a results, struggles with alcohol addiction and suicidal thoughts.

“You can only imagine what she’s been through,” said the plaintiff’s lawyer, Jacques Stuart, who has practiced law in Nunavik since 1996.

“I think this is a first — a girl getting raped in a police car,” he said. “So we have nothing to compare it to.”

The plaintiff waited the maximum time period of three years before filing the lawsuit last August, claiming $400,000 in damages.

The lawsuit accuses the KRPF and its operator, the Kativik Regional Government, of showing “a serious lack of professionalism and gross negligence by leaving an unexperienced police officer, with no knowledge of life experience of Northern Quebec populations, and without the authorization to carry a firearm, to ensure alone the security of the public.”

The lawsuit alleges that the officer on duty took the plaintiff and Kritik to the Tasiujaq police station after the incident, where the officer is alleged to have slammed the cell door in the young woman’s face, knocking out one of her front teeth.

The document also alleges the officer did not try to contact the teenager’s parents nor did she perform a rape kit on the victim after she was brought into the station and later spent the night.

The KRG has yet to comment on the lawsuit.

KRG lawyers have until the end of March to meet and interview the plaintiff if they choose to, Stuart said.

In the end, Stuart said he hopes the lawsuit will encourage changes in KRPF policy to ensure that Nunavik communities are properly policed.

Just a few weeks before the September 2011 incident, KRPF’s management told KRG meetings that the force finally had at least three officers stationed in each community, making good on a 2009 promise.

“And then a week later, you have an inexperienced police officer patrolling a community alone, with no weapon,” Stuart said. “This should not happen.”