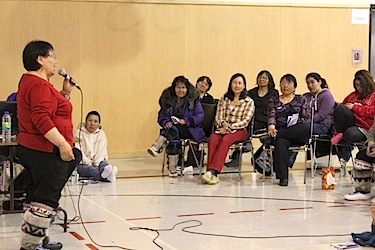 Quaqtaq’s then mayor Eva Deer speaks to women at the 2013 Arnaliat Nipingit conference in her home community. (PHOTO COURTESY OF SATURVIIT)

Saturviit Inuit Women’s Association of Nunavik is hosting its second regional women’s conference this winter in the Hudson Bay community of Akulivik.

Saturviit is a non-profit organization whose mandate is to give voice to Inuit women and children and to support positive, healthy communities.

The event, called Arnaliat Nipingit 2015, will serve as a forum for Nunavimmiut women to gather and share views on employment, education, family challenges, parenting, violence and addiction, Saturviit said in a Jan. 29 release.

From March 2 to March 6, the association is inviting two women representatives from each of Nunavik’s 14 communities to register for the conference, open to beneficiaries of the James Bay and Northern Quebec Agreement who are at least 16 years of age.

The five-day conference will offer training opportunities such as evening sewing workshops, followed by an exhibit and fashion show for seamstresses to show off their creations.

Participants will also have a chance to sit in on Good Touch/Bad Touch workshop on March 6 and 7, a regional program that promotes awareness around sexual abuse.

Childcare will be available for participating mothers.

Quaqtaq hosted the last Arnaliat Nipingat women’s conference in 2013. Since then, the association has been working with southern organizations to better understand the issues facing Nunavimmiut women, including collecting data on missing and murdered women in the region.

For more information on this year’s event, visit www.saturviit.ca or contact Niali Aliqu at 819-496-2437.