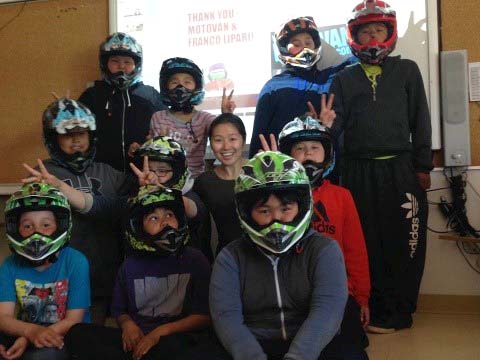 Students at Asimauttaq school each received their own helmet this past January with support from the KRG, Brighter Futures and Motovan. (PHOTO COURTESY OF I. CHU) 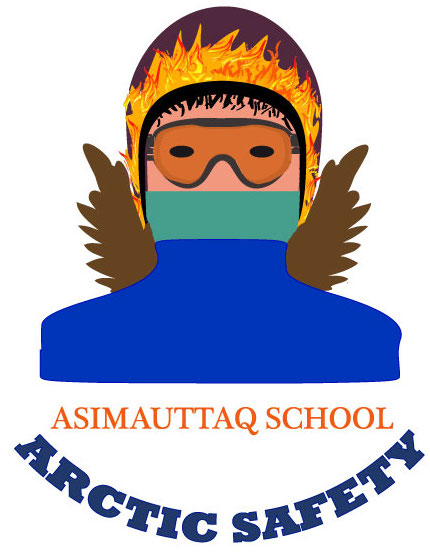 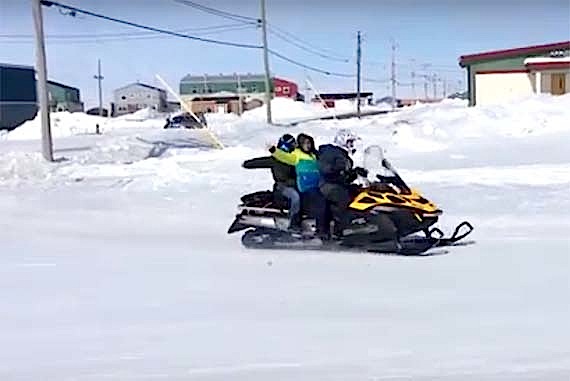 A scene from Arctic Safety! Wear Your Helmet!, a short film produced by students at Asimauttaq school in Kuujjuaraapik.

It’s a bright, sunny winter day in Kuujjuaraapik and the roads are busy in Nunavik’s southernmost community.

A group of three young people come zooming up the street on a snowmobile. The driver and the back passenger are wearing helmets, but a girl in the middle isn’t—and that proves critical to the next moments of her life.

As the snowmobile turns a corner and revs up the next street, the group collides with an oncoming all-terrain vehicle. All three passengers are thrown off the machine and blood is seen coming from the girl’s head.

Fortunately, the next scene tells viewers that no one was injured in the production of the film.

But a subtitle warns of the potential outcome: “If [the passenger] survives, she will require intensive surgery and will be suffering from health problems for a long time.”

A group of students from Kuujjuaraapik’s Asimauttaq school helped make the short film. It’s a lesson in Arctic safety, and the message is clear: wear a helmet when you’re driving or riding a vehicle.

“We can either die or get brain damaged,” said Sulimmiva Pilurtuut. “We need helmets to be safe.”

The 12-year-old student helped to apply the bloody make-up for the film, while her classmates Noah Napartuk and Josie-Sam Kumarluk starred in it.

And now, when Pilurtuut sees someone on an ATV, she tells them this: “Hey! Wear a helmet! You could get brain damage.”

But Pilurtuut didn’t wear a helmet until very recently. The students’ film is part of a larger safety campaign and project led by a public health researcher working with both Inuit students in Kuujjuaraapik and Cree students in the neighbouring community of Whapmagoostui.

Research has already noted that both Nunavik and the neighbouring Eeyou Itschee region have much higher rates of off-road vehicle collisions than in the rest of Quebec.

And a 2015 study by researchers at McGill University’s faculty of medicine found Nunavik has the highest rate of hospitalization from traumatic brain injury in Quebec, more than six times the province’s average.

In Nunavik, about 40 per cent of all traumatic brain injury hospitalizations were caused by ATV and snowmobile accidents, the study found. Another 4.5 per cent was caused by bicycle and motorcycle accidents, while five per cent was allotted to pedestrian injuries.

Irene Chu, who just completed a Masters in Public Health at the University of Toronto, decided to focus her research on youth in the neighbouring Inuit and Cree communities, with the goal of helping youth develop their own safety campaigns.

First, Chu wanted to find out why they were opting not to wear helmets.

Some youth felt helmets interfered with hunting, she found, while the extreme cold can fog up visors.

But access to helmets is limited in the region: Chu was surprised to find the stores in Kuujjuaraapik and Whapmagoostui didn’t even stock them.

Helmets were available for a time, while the Kativik Regional Government ran its own off-road highway vehicle safety campaign called On The Right Path—although funding for the program was recently cut.

Even if helmets were available, Chu acknowledged they would be expensive.

“There are multiple factors as to why they don’t wear [helmets],” she said. “But interestingly, a lot of people felt it was important. There was an interest in making their community more safe.”

Chu helped the students at Asimauttaq school in Kuujjuaraapik and Badabin Eeyou school in Whapmagoostui develop their own safety awareness campaigns; both produced their own posters and videos promoting off-road vehicle safety.

Earlier this year, students measured the circumference of their heads and chose their top three favorite helmet colours and models. With support from the KRG, Kativik School Board, Brighter Futures, Cree organizations and Motovan, Chu was able to help distribute more than 500 helmets to youth from age four to 18.

Now most snowmobile and ATV riders wear their helmets, Pilurtuut said, though not always.

Getting access is the first step, Chu said; now students, parents, community leaders and organizations have to encourage safe driving.

“The public health campaign needs to be at the community level, as much as possible,” she said.

Chu is now working for Cree public health in Eeyou Itschee and hopes to see the campaign spread to other communities in northern Quebec.