DFO has yet to establish new quotas 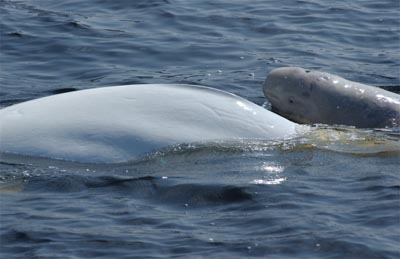 Nunavik’s waters are now open to harvesters for the 2014 beluga hunt, the federal department of Fisheries and Oceans said April 26.

The April 26 launch of the season coincides with the beluga’s spring migration through Hudson Bay.

But Nunavimmiut hunters will have to wait a little longer to get new quotas for each community, while DFO establishes a total allowable take for the 2014 season.

The Nunavik Marine Region Wildlife Board has provided its recommendations — based on community consultations — to DFO, which has 60 days to either approve or establish its own quotas.

“In the meantime, belugas are starting to pass by, particularly the western Hudson stock,” said Adamie Padlayat, executive director of the Nunavik Marine Regional Wildlife Board. “So we had to get a variation order for an interim opening to allow Inuit to hunt.”

For the time being, the total allowable takes and non-quota limitations from 2010-2013 are temporarily carried over for beluga hunters, until the new decision is made by DFO.

That will allow harvesting in the Hudson Strait, eastern Hudson Bay, Ungava Bay, and farther south in the Long Island and James Bay areas.

From April 26 to November 30, the eastern Hudson Bay quota is set at nine belugas, while the Long Island and James Bay areas is 31.

From April 26 to August 31, harvesters in Ungava Bay can take 10 belugas, while the Hudson Strait quota is 194.

DFO’s quotas are in place to protect and conserve the eastern Hudson Bay beluga population.

Padlayat said the marine wildlife board cannot say what recommendations it made to the DFO. Whatever quota DFO establishes will be applied to the hunt later in the season.

But Padlayat said it was important to reach an agreement with DFO to open the hunting season on time, to allow hunters to harvest while the belugas are accessible.

“We wanted to make sure there were no incidents like in Quaqtaq [in 2012], where people could get caught by authorities for hunting too early,” he said.

In November 2012, hunters from three Ungava Bay communities harvested seven belugas near the community of Quaqtaq, while a herd of about 200 animals swam by.

But the hunters went home empty-handed after the DFO — which had tracked the hunters by helicopter — seized the belugas, noting the quota for the season had already been met.

In Nunavik, the following areas remain closed to the beluga hunt at all times: