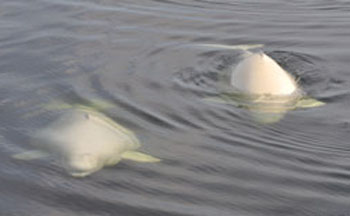 Harvesters in Nunavik caught the last of their total allowable take of belugas — the equivalent of 162 whales — on Aug. 17. (FILE PHOTO)

Nunavik’s beluga whale harvesting season has come to a close and with it, the region’s latest three-year beluga management plan.

Harvesters throughout the region caught the last of their total allowable take, the equivalent of 162 whales, on Aug. 17, prompting the federal department of Fisheries, Oceans and the Canadian Coast Guard to issue a closure notice in all regions except for Long Island and James Bay.

But the closure comes months before the end of beluga harvesting season — which can stretch into November.

“It normally doesn’t happen at this time,” said Kevin Wilkins, chief of Aboriginal fisheries for the Quebec region of Fisheries and Oceans.

The most recent plan was designed to offer hunters flexibility about when and where they hunt, Wilkins pointed out, by bumping the quota and leaving the harvest season open throughout the three-year period rather than going year by year.

Under the three-year plan, focused on protecting the eastern Hudson Bay stock of beluga whales, any belugas hunted outside of the area are counted against that sub-species, although at a different rate.

In the Hudson Strait, for example, where eastern Hudson Bay whales make up about 10 to 20 per cent of the local population, each whale caught is considered one-tenth or one-fifth of a beluga, depending on the season.

Over the 2014-2016 period covered by this management plan, Nunavik hunters have harvested a total of 762 whales (the equivalent of 162 EHB whales), Wilkins noted.

Compare that figure to between 2003 and 2013 when hunters harvested an average of 207 whales a year.

“So under this plan, hunters were able to harvest more belugas,” Wilkins said.

It’s not clear how the early closure will impact Nunavik communities, some of which were eyeing a fall harvest.

Nunatsiaq News was unable to reach the regional hunters association, Nunavimmi Umajulirijiit Katujjiqatigiinningit, for a comment on the closure.

In September, the Nunavik Marine Regional Wildlife Board will host meetings with the regional hunters association along with Makivik Corp. and officials from fisheries and oceans in September to decide how a new plan will look ahead of its renewal in 2017.

“All the [beluga management] plans present challenges,” Wilkins said. “We’ll definitely be working with the wildlife board and regional organizations to iron out anything that needs tweaking.” 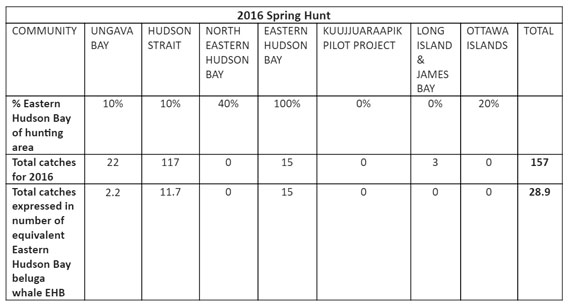 Here’s a rundown of the 2016 beluga hunt, which included the equivalent of 28.9 EHB whales, and which regions they were hunted in. TABLE COURTESY OF DFO)