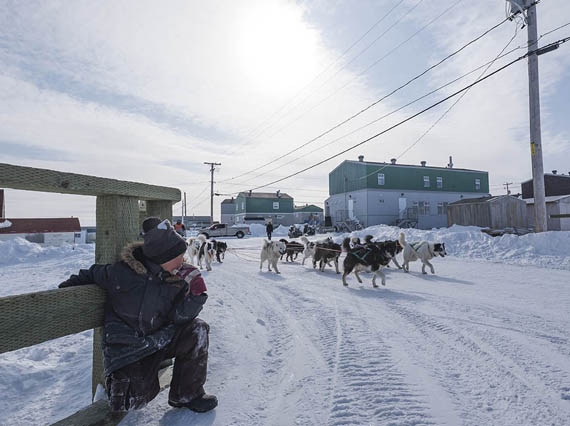 A young boy watches as Ivakkak dog sled teams arrive in his home community of Kangirsuk March 22. The race was cancelled for three days over the weekend due to high winds. (PHOTO COURTESY OF MAKIVIK)

That’s when high winds and blowing snow started to deteriorate trail conditions and visibility in the region.

Ivakkak coordinators had to cancel the race March 23, and then again March 24 and March 25, while they waited for the bad weather to pass though the region.

Over the weekend, Team 11 mushers Edua Lucassie and his partner, Steven Airo, also decided to drop out of the race after one of the team’s female dogs went into heat, which was creating distractions among the other dogs.

There are 10 teams left in the race, which finally left Kangirsuk March 26. As of early March 27, the teams were set to reach Quaqtaq by the day’s end.

Coordinators hope the race will end before Friday, March 30, which marks the start of the Easter long weekend.

As of Monday morning, Willie Cain Jr. and his partner, Ken Lebbe, both of Tasiujaq, led the race.

The 2018 edition of Ivakkak will cover just over 500 kilometres between Tasiujaq and the finish line in the Hudson Strait community of Kangiqsujuaq.

This year marks the 17th edition of the Makivik Corp.-sponsored race. You can track the mushers’ positions live from the Ivakkak website.