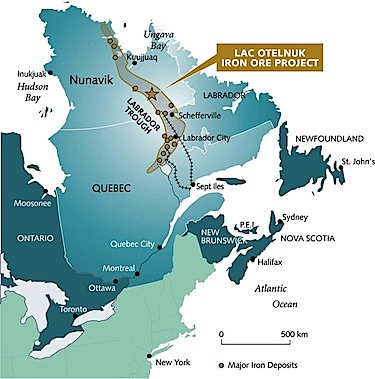 Move over Mary River, Hopes Advance , Roche Bay and Haig Inlet: yet another huge iron mine project appears to be poised to move ahead.

A fact sheet on the Lac Otelnuk deposit calls it “the largest iron ore deposit in Canada” and one of the 15 largest in the world.

Otelnuk’s deposits contain reserves of at least 11.35 billion tonnes of iron spread over 36 kilometres — and double that amount of iron ore could be there, according to recent resource estimates.

The mine project’s promoters: Adriana Resources Inc., whose majority owner is Chinese steel giant Wisco, one of the major subsidiaries of Wuhan Iron & Steel Corp.

And the joint-venture company wants to produce 50 million tonnes of iron a year or more from Lac Otelnuk for up to 100 years.

To do that, they’ll have to go through an environmental and social review of the project — and then sink $13 billion into building the mine complex and the infrastructure it needs.

Adriana has already hired Golder and Associates to produce an environmental and social impact assessment of the project. Golder has completed the environmental baseline fieldwork and now plans to meet and consult with people in the communities which would be affected by the mine.

At the same time, Adriana is fast-tracking a feasibility study that should be ready by the end of the year, the company said earlier this month.