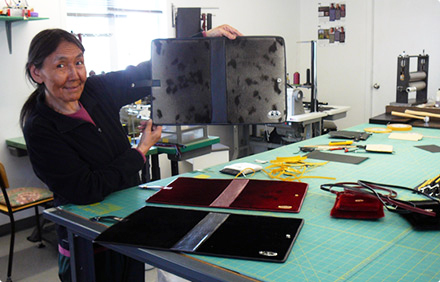 Nunavik Creations designed and produced traditional Inuit clothing and accessories, much of it made with sealskin and fur. (PHOTO COURTESY OF NUNAVIK CREATIONS)

Nunavik Creations operated for 15 years, designing and producing traditional and contemporary Inuit clothing and accessories, sold online and from its Kuujjuaq boutique.

Much of the work was produced by seamstresses in the region’s communities, with a heavy focus on sealskin and other fur.

But the subsidiary had posted losses for several years. Earlier this year, Makivik reported losses of $6,779,699—the biggest losses reported among the organization’s subsidiaries and joint ventures.

“It’s with a heavy heart that we have to make this difficult decision,” said Makivik’s vice-president economic development, Andy Moorhouse, in a June 16 release.

“However, it should be noted that despite best efforts to market and publicize the clothing, the company has been reporting losses for several years, and thus we had to make the decision that we did.”

Moorhouse said Makivik has opted to keep its tannery open in Kuujjuaq to provide a place for hunters to sell their skins and process pelts.

“Moving forward,” he said, “we plan to look on how we can support seamstresses at home.”

Makivik said it’s now conducting an inventory of the company’s remaining stock and fixed assets in order to liquidate them.

The closure comes months after the Inuit organization flagged slow revenue growth among many of its subsidiary companies.

That prompted a review of its investments and business activities which found Makivik’s equity has not kept up with inflation over the years since the James Bay and Northern Quebec Agreement was signed in 1975.

To that end, the committee that lead the review recommended Makivik create an arms-length entity to oversee the day-to-day operations of Makivik’s subsidiaries and its joint ventures.

The organization announced its new Nuvviti Development Corp. earlier this year, which is expected to be incorporated this summer.