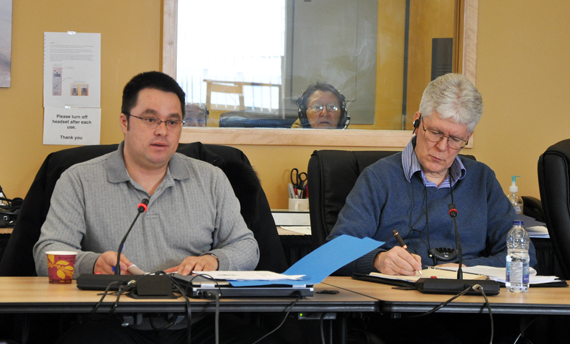 KUUJJUAQ — Questions were raised about the future of Nunavik’s social housing body at a meeting of the Kativik Regional Government’s regional council Feb. 27, as frustration grows over the quality and availability of public housing in the region.

Over the last year, the Kativik Municipal Housing Bureau has become a sounding board for the region’s housing problems: Nunavimmiut say they’re frustrated with the lack of available social housing, and those who do have housing say rent is too high and their homes are in urgent need of repair.

“We know that we’re really behind in housing, because we need more than 800 new houses and our population is growing fast,” said interim KMHB chair George Berthe, who stepped into the role following the resignation of Michael Cameron earlier this month.

“Some of us board members have thought about just closing KMHB, because we don’t feel like we are able to make any improvement.”

Other regional organizations have stepped in to offer help.

In December, the KRG and Makivik asked Quebec’s social housing body, the Société d’habitation de Québec, to cancel the eight per cent rent hikes set for 2014-15 until a review of the region’s rent scale can be carried out, taking into account Nunavik’s cost of living.

The SHQ has not formally responded to the request, but in a more recent housing meeting between Quebec and Nunavik officials, the organization gave its reasons for maintaining the rent hike in Nunavik.

“We were told that they’re not concerned about (the cost of) bread here, they are only worried about Nunavik’s rent, which is already at the lowest scale,” Berthe told regional councillors Feb. 27.

“It put us in a very awkward place — we’re in a political jam.”

The pressure is now on to work out a revised rental scale – if any – before April 1, when the KMHB is required to inform tenants of rent hikes.

In the meantime, responding to Nunavmmiut concerns about housing in the region has become a full-time job for the KMHB, said board member and KRG executive committee member Jennifer Watkins.

“It’s like the board members are attacked on a daily basis,” she said. “We do hear and we know about your problems, but I sometimes don’t appreciate receiving calls in the middle of the night. We’re doing the best we can.”

But KMHB councillors admit their best may not be enough, since the organization’s structure prevents Nunavimmiut from making decisions about their own housing.

“It’s high time, according to what [chair George Berthe] is presenting to us, that we look at things differently,” KRG chair Maggie Emudluk told council. “Because KMHB is not a decision-making organization, they’re only applying southern rules.”

For now, Berthe is encouraging Nunavik’s social housing tenants to hold on to their notice of assessments, which is what the housing bureau uses to determine a tenant’s rent scale.

Berthe also reminded tenants that the vast majority of the 200 subsidies under Quebec’s home ownership program are still available.

“Maybe for different reasons, there have been few applicants,” he said, “and unfortunately, the money is just sitting there.”

It’s frustrating not being able to access money targeted for housing, Berthe added, in a region where some Nunavimmiut are sleeping on relatives’ couches while they wait for a social housing unit to open up.

“There are people who wander around at night and wait for a bed to sleep in, there’s a schedule for sleeping, showering and even using a kitchen,” he said.

“We have even talked about opening homeless shelters, but it’s not our mandate,” he said. “This has to come from other organizations.”

KRG’s Quaqtaq representative Daniel Oovaut was appointed to the KMHB board of directors Feb. 27 to replace Michael Cameron. The new board is expected to elect a new president next month.