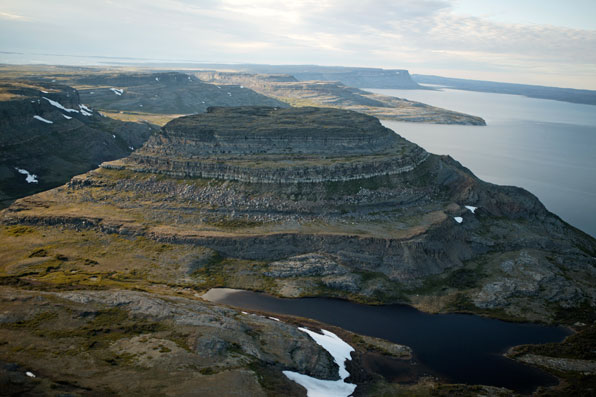 First there was one — Pingualuit provincial park, then another — Kuururjuaq — and now there’s a third park in Nunavik, Tursujuq, officially created July 18.

But much work remains to be done before Tursujuq can welcome any visitors.

And work on building infrastructure within the new park is behind schedule, said Michael Barrett, associate director of the Kativik Regional Government’s parks department.

Quebec’s council of ministers approved the park’s $8-million infrastructure agreement for 2013 to 2017 — but that deal is waiting on final signatures before the money can be released.

So, the $8 million for Tursujuq, more than Quebec earmarked for Nunavik’s other two provincial parks, sits in reserve.

That has pushed back construction of the park pavilion to 2014, Barrett told the recent KRG regional council meeting in Kuujjuaq.

Meanwhile, the Tursujuq park office is housed in KRG staff housing in Umiujaq.

Parks staff have started looking at some of the existing infrastructure with the park. In June, they travelled through the park, inspecting outfitting and research camps that will eventually be purchased to add to the park infrastructure.

And, in early August, a group from the Université de Québec à Chicoutimi canoed up the Nastapoka River to map it.

The Nastapoka and the Upper and Lower Seal Lakes are considered prized features of Tursujuq. Home to rare inland seals, the lakes and river were eventually included in the park boundaries after intense lobbying efforts.

The Nastapoka, coveted by Hydro Quebec for its hydroelectric potential, was not included in earlier park boundary proposals.

But the creation of the park with expanded boundaries protects the area from mining, forestry or hydroelectric development, although hunting and fishing by beneficiaries are still allowed.

Tursujuq covers 26,107 square kilometres between Umiujaq and Kuujjuaraapik, making it the largest park in eastern Canada.

The park includes Richmond Gulf, known as the Lac Guillaume-Délisle in French and Tasiujaq in Inuttitut, with its sweeping cuestas or cliffs bordering the Hudson Bay coast.