KRG hopes to start undersea survey off Nunavik this summer 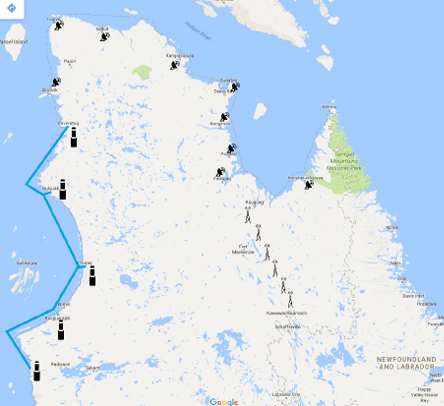 The KRG’s proposed plans to deliver higher-speed internet to Nunavik include a fibre-optic cable along some Hudson coast communities. The rest of the upgrade will rely on a microwave tower link connecting Kuujjuaq to Schefferville and surplus satellite capacity to the remaining communities. (IMAGE COURTESY OF TAMAANI)

KUUJJUAQ—The Kativik Regional Government has awarded a contract to an American firm to do the technical work ahead of a proposed seabed survey along Nunavik’s Hudson Bay coast this summer—the first step towards laying fibre-optic cable in the region.

WFN Strategies, which specializes in submarine fibre cable systems, would assist with “technical specifications” in advance of the undersea survey along the coast during the 2018 open water season, WFN and the KRG announced earlier this month.

The KRG has yet to launch a call for tenders for the survey itself, but the completed work would be used for the construction of the proposed Eastern Arctic Undersea Fibre Optic Network, a submarine cable system, starting in 2019.

Under the plan, the KRG’s Tamaani Internet would lay undersea fibre optic cable from Chisasibi north to Kuujjuaraapik, Umiujaq, Inukjuak and Puvirnituq, to have the network in operation by 2020.

The project is still waiting on $125 million from different levels of government to fund its first phase, though the KRG expects to receive a response by March.

The KRG initially planned to lay fibre optic throughout the region by 2021.

But after completing a feasibility study in 2016, the regional government opted to use a combination of technologies to help deliver high-speed interview to Nunavik, including fibre optic to the four Hudson coast communities, microwave towers connecting Kuujjuaq to Schefferville, and then adding surplus satellite capacity to the remaining communities.

Once the fibre optic is laid, however, there will be the opportunity to extend the network later on.

Over the longer term, a second phase could extend the fibre optic from Puvirnituq to Akulivik, Ivujivik and Salluit between 2019 and 2021.

And from 2021 to 2023, a third phase could expand that network from Kuujjuaq to Iqaluit and possibly Nuuk, Greenland, at an estimated cost of $100 million, though no funding sources have been identified.

The KRG and Tamaani only just completed a bandwidth upgrade in the region by shifting to a new satellite provider, which has upped internet speeds from 1.5 megabits per second to up to three and four megabits per second for its more than 3,000 customers.

WFN Strategies is the same firm that surveyed the cable route under the former Arctic Fibre scheme, which proposed to lay fibre from London to Toyko via the Northwest Passage.

An earlier version of this article said WFN Strategies was awarded a contract to survey the seabed along the Hudson coast. In fact, WFN will do technical work in advance of the proposed survey.