“I thank all who put others before themselves” 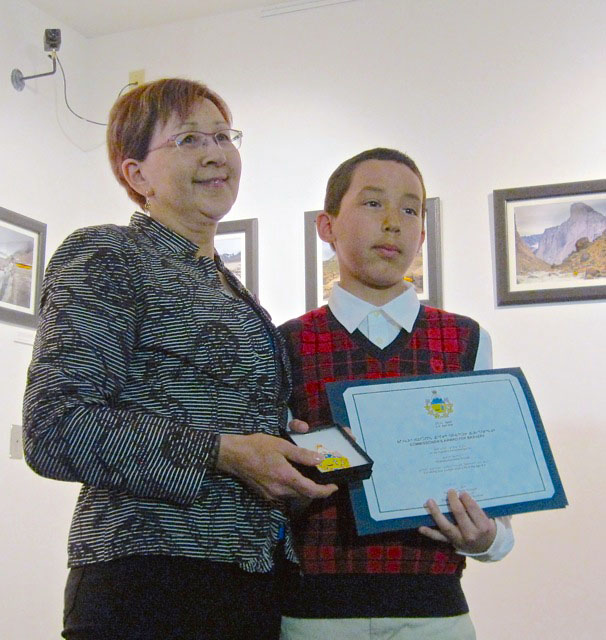 Deputy commissioner Nellie Kusugak poses with Amaujaq Groves at an April 17 ceremony in Iqaluit. Groves received a commissioner’s award for bravery for helping his baby sister while she choking. (PHOTO BY PETER VARGA)

Amaujaq Groves was only four years old in December 2007, when his baby sister started choking on her cereal in their Iqaluit home.

But the pre-schooler reacted with the wisdom of someone many times his age. Groves quickly stuck his finger in his sister’s mouth and pulled out the piece of food she was choking on, saving the little girl’s life.

Two years later, in August 2009, Samo Angnakak was working on his boat in his hometown of Pangirtung when he heard the sound of someone snorkeling and then splashing water.

When he looked up, he saw his six-year-old nephew in the water struggling to stay afloat. He and Marlene Angnalak rush to the boy and pulled him to safety.

These are just a few of the stories of bravery from across Nunavut that were shared during an April 17 ceremony in Iqaluit, where deputy commissioner Nellie Kusugak handed out bravery awards to six Nunavummiut.

Among the recipients were Pitseolak Alainga and Billy Kownirk of Iqaluit, who survived one of Nunavut’s deadliest boating accidents.

In the fall of 1994, Alainga and Kownirk were among a group of walrus hunters on Frobisher Bay when high winds and rough waters struck.

While eight of the hunters drowned at sea, Alainga and Kowmirk endured three nights and four days hanging onto their boat, encouraging each other to stay alive.

“Life is so precious,” deputy commissioner Nellie Kusugak said in an April 23 Government of Nunavut release. “We’ve been taught to love and help one another (and) I thank all who put others before themselves. We are all grateful.”

Iqaluit resident Mathew Knickelbein received the commissioner’s humanitarian award for helping his community stay safe and warm during a major blizzard in January 2014 that left residents of Apex without power for 18 hours.

Knickelbein, principal of Nanook elementary school in Apex, risked his safety to open his school to ensure people there had access to heat and light that day.

Two other Iqaluit residents were recognized April 17 for their volunteering efforts.

“I believe volunteers are the heart of every community,” said Kusugak. “What would we do without their tireless support?”